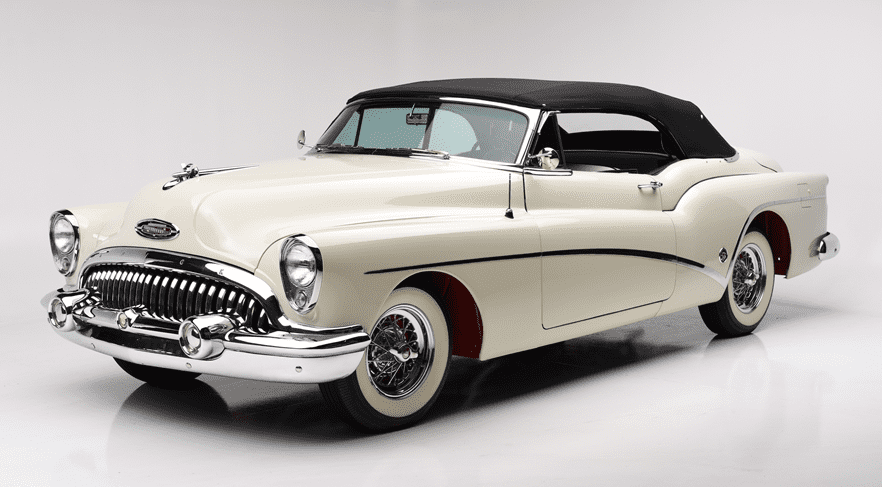 Editor’s note: This is the fifth in a 10-day series featuring cars to be sold April 8-10 at Barrett-Jackson’s 2016 Palm Beach Auction.

Created to celebrate Buick’s 50th anniversary, the Skylark joined the Oldsmobile 98 Fiesta and Cadillac Series 62 Eldorado as the top-of-the-line, limited-production specialty convertibles introduced for the 1953 model year as part of General Motors promotion of its leadership in design. Of the three, Buick proved to be most successful, in part because of its less expensive price tag.

Though less costly to buy, the 1953 Skylark was handmade in many respects. Only stampings for the hood, trunk lid and a portion of the convertible tub were shared with the Roadmaster and Super convertibles.

All Skylark tubs were finished with various amounts of lead filler. An overall more streamlined look was reinforced by cutting the windshield almost 3 inches shorter and lowering the side windows and convertible top frame proportionately. Seat frames and steering column were dropped to provide proper headroom and driving position.

One of only 1,690 produced, this particular 1953 Buick Skylark convertible, lot 393, is offered at Barrett-Jacksons Palm Beach auction with a reserve.

The car features Buick’s 322 cubic-inch (5.3-liter) Nailhead V8 in place of the automaker’s longstanding straight-8 as well as a 12-volt electrical system. Power accessories were standard, such as the Dynaflow automatic transmission, power steering, brakes, top, windows and front seat. There is even a power antenna for the Selectronic signal-seeking radio. This model also marked the debut of highly stylized cutout wheel openings where authentic wire wheels, produced by Kelsey-Hayes, could be seen.

Adding to the overall luxurious look and feel of the car, is the use of chrome everywhere except the plated and painted “Skylark” center emblem.

This car was originally purchased in February 1953 by millionaire George Whittell of Reno, Nevada, and was given to his nurse after his death. It went on to be stored at Harrah’s for many years and features its original paint without any rust.

In 2004 the Skylark endured a total frame-off restoration that was completed in time for the vehicle to earn a Junior First Place at the AACA spring meet in 2006. Documentation of the vehicles history along with photos and receipts of the restoration are included in the sale of the vehicle.