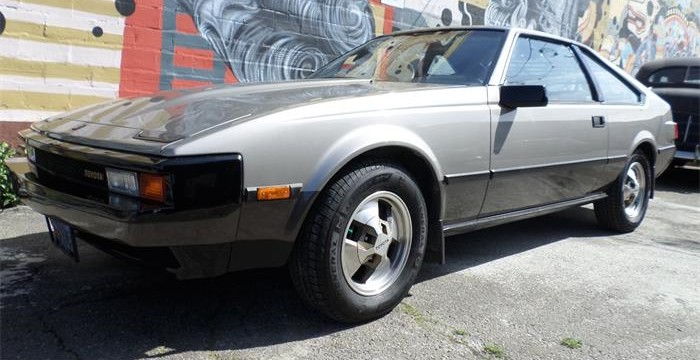 For a long time, cars that were made in the ‘70s and ‘80s were considered non-collectable, in particular those cars that were also of Japanese descent. As a result, many were neglected. But recently, interest  has been growing and values have been rising for unmolested or low-mileage cars from this era, such as the Pick of the Day, a 1982 Toyota Celica Supra.

Toyota redesigned the Celica Supra for the 1982 production year. It was based around the Celica platform but the Celica Supra had a different front end and fully retractable pop-up headlights. For the North American market, the Celica Supra was powered by a 6-cylindar engine known as the 5M-GE, rated with an output of 145 horsepower and 0-60 acceleration in 9.8 seconds.

Celica Supra in 1982 also featured four-wheel independent suspension designed by Lotus along with rack-and-pinion steering. The car came as either the L-type, or luxury model, or the P-type, which stood for performance.  While being mechanically identical, L-type and P-type were differentiated by available options, wheel and tire size, and body trim.

Listed on ClassicCars.com, this Celica Supra has been identified as an L-Type with the optional four-speed manual transmission.  According to the listing, the car came fully loaded when ordered new and features the rare digital dashboard display, all power options including sunroof, air conditioning, factory Alpine stereo, leather seats and louvered rear-window shade.

This Supra was bought by its first driver after his or her lease was up, then sold to a family friend before finding its way to the listing dealership. Throughout its life, the car has been mostly garaged and stayed in northern California, accumulating just 18,000 miles since new, the dealer says.

In addition to a straight body without blemishes, this Celica Supra wears its original paint with slight chipping around the front end and blistering under the fuel cap from split gasoline, according to the listing.

Recently, the car was fully serviced, including a freshened suspension with new shocks, tie-rod ends and assorted bushings, along with a full set of new tires. According to the listing, a new exhaust system was also fitted and all the vacuum lines and under-hood rubber components were replaced, along with new spark plugs and wires.

Offered for $17,490 in Oakland, California, the car includes a jack, spare tire and original tool kit, which has never been used. The car also comes with paperwork, original keys and books.