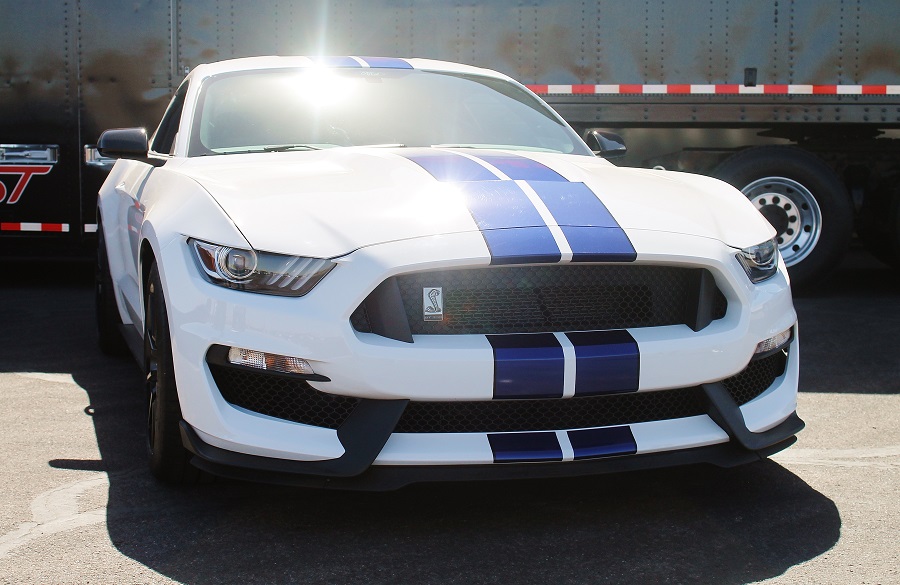 My entire opinion of the newest Mustang changed at the push of a button. That was the push-to-start button on the 2016 Ford Shelby Mustang GT350, staged on the grid at the West Track of Wild Horse Pass Motorsports Park just south of Phoenix.

Another corner approached, the anticipated upshift was forgotten and the Brembo brakes kept the car flat and stable as it prepared to launch into the next apex without any hint of nosedive or squirming.

The GT350 delivers all of the thrills of the Shelby GT500, a car that was all about supercharged engine power and quarter-mile times, with the added dimension of great handling. GT500 made Mustang enthusiasts weak in the knees while the rest of the automotive world viewed it merely as a powerful muscle car, and moved on. The GT350 breaks the “Mustang mold” with sophisticated maneuverability, assisted by the newly minted independent rear suspension, which makes it a no-excuses track monster that is more capable and versatile than the GT500 it replaces, while gaining the interest of more than just die-hard Mustang fans.

Being one of those Mustang enthusiasts, I’ve managed to get behind the wheel of nearly every generation of Ford’s original pony car, and I have experienced various degrees of performance. That said, I found the 2016 GT350 to be a serious contender as one of the best Mustangs to date, as it comes track ready yet retains enough tractability and creature comfort to make it suitable for daily driving.

Although initially skeptical of the S550, as the latest generation Mustang is known internally, my concerns – that the advanced technology of the sixth generation would cloud the raw mechanical feel of the sports coupe – vanished after a day with the GT350. As a purist, what I enjoyed most is that the car is still unmistakably a Mustang, though it feels like a Mustang on steroids.

The GT350’s upgrades are very noticeable over the standard 2016 Mustang GT, and the car performed as I could only wish my own mid-2000s Mustang would if I added countless suspension mods and bolt-on power boosts. The GT350 managed to meet and exceed everything I wanted in a track car, and it left nothing to be desired.

Powering the GT350 is a 5.2-liter flat-plane-crankshaft V8, rated at 526 horsepower and 429 pound-feet of torque. Other features among the many performance upgrades include track-focused chassis tuning, significant aerodynamic changes that include lowering the hood around the engine and a slight front-fender flare, two-piece Brembo disc brakes, new MagneRide damping option, lightweight Tremec six-speed manual transmission and Recaro sport seats.

The newest-generation Mustang proved to be the breath of fresh air the brand needed, and the GT350 takes the Mustang from being a straight-line powerhouse to an agile, versatile car for street or track that achieves world-class performance with unmitigated poise.