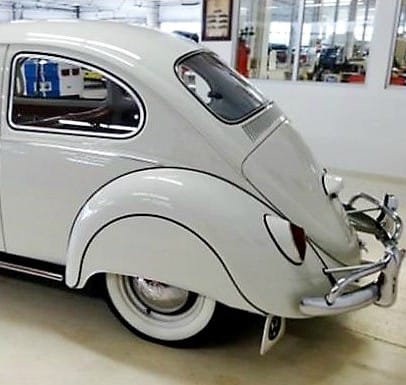 Volkswagen Beetles could be the most common of all collector cars (well, Ford Mustangs might be close), with loads of avid VeeDub enthusiasts, clubs and events. Beetles appeal to young hobbyists for the simplicity of their classic design, easy repair and low cost, as well as their vast customization possibilities.

Too bad the great majority of them were used up and discarded and allowed to rust away rather than being preserved. Which is what makes the Pick of the Day such a great find: a 1965 Volkswagen Beetle in apparently immaculate original condition with just over 22,000 miles on its odometer.

And if nothing else, check out those awesome fender skirts.

The Columbus, Ohio, classic car dealer advertising the Beetle on ClassicCars.com calls the car “a spectacular example” with “a grand total of only 22,553 miles.”

“To generalize, this car is a dream car for the VW Beetle lover,” the dealer says in the ad. “Not only a beautiful car for its age but probably one of a very few that are in this condition.”

The VW also has its original tool kit, the seller notes, which is a true rarity for these cars.

“Quite often the tool kit is rusted away and tools long lost,” the seller says. “This kit is intact with all of the tools at the ready.”

The photos show a Beetle that looks new, with clear paint and unmarked chrome, as well as a beautiful interior. There is no word in the ad as to whether the car was resprayed or re-upholstered, but the implication is that everything is original.

The car is powered by its correct 1,200 cc flat-four engine with four-speed manual transmission, according to the listing, and it runs “extremely well like a car with only 22k miles should.”

The Beetle is affordable with an asking price of $15,995, for a good-looking, low-mileage classic VW that is apparently preserved in its original condition.