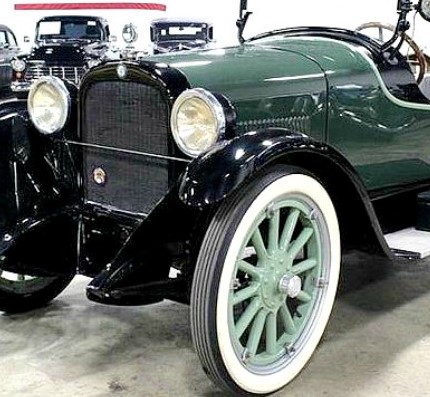 Cool sports cars, rakishly styled to emulate the race cars of the day, go back almost to the beginning of the automobile. By the 1920s, two-seat roadsters built on the chassis of regular sedans were all the rage, from the high and mighty coachbuilt luxury motorcars to those with more common origins.

The Pick of the Day is a sharp-looking example of the latter variety, a 1924 Dodge Brothers roadster that apparently was customized in period as a cut-down racer with lowered seats and a tail section that tapered downward, and with an adventurous-looking pair of spare tires mounted on the rear deck.

This unusual roadster is a “clean and well-kept example,” according to the listing on ClassicCars.com from a Michigan classic car dealer.

“From the outside, this vehicle shows off all the classic appeal with a great deal of its originality intact,” the seller says. “The paint, wheels, panels and lines are all in great shape with what must have been a full restoration not too long ago.”

For 1924, the standard models were upgraded by Dodge Brothers, still a free-standing company several years after the untimely deaths of founders John and Horace Dodge. The new look included a raised hood and larger grille, and the suspension was improved.

The car is powered by its original 212 cid L-head four-cylinder engine that pushed out 35 horsepower and was attached to a three-speed transmission. It runs well, the seller says. The interior is also in good condition with its original dashboard intact.

The car also has what appears to be a “mother-in-law seat,” a small chair on the right running board that would be folded out for use by a third, very-brave passenger.

The sporty body style adds greatly to the Dodge’s appeal, the dealer adds: “This vehicle gives you an antique racer feel when climbing into the cockpit.”

The roadster is offered for $29,900, which would give the buyer a fairly unique expression of a sporting car from the distant past that would look pretty special rumbling down the road today.