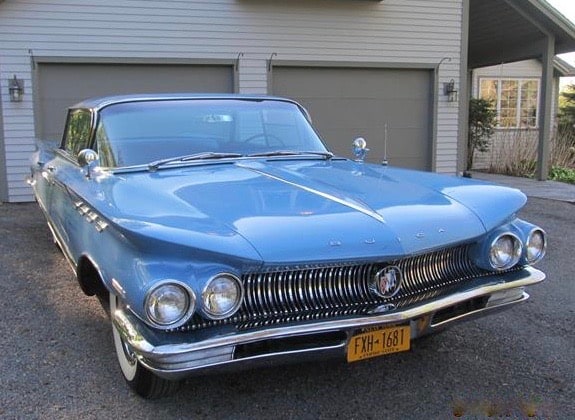 Though not quite a long as its big brother, the Buick Electra stretched out 221.2 inches for the 1960 model year. Only the Electra 225 — which took its name from its length in inches — was longer, and 1960 was the last year these cars would span such distances. In 1961, Buicks were trimmed down, with both versions of the Electra a mere 219 inches in length.

Our Pick of the Day is a 1960 Buick Electra, a four-door hardtop equipped with Buick’s 445 big-block Wildcat V8, according to the seller.

“My granddad bought car new,” the seller says. “Was garaged in Illinois 35 years. I transported to NY and keep in my garage since ’95.”

The advertisement on ClassicCars.com notes that grandfather kept the plastic seat covers on the car, so the seats are “perfect,” although there are no seat belts.

The paint is original and looks amazing in the few photos that accompany the ad. There is no photo of the engine compartment, but the ad states that it is original, “no chrome.”

“The car is not restored,” the ad notes. However, the generator, starter, radiator, brakes and tires are new, and the engine “runs well.”