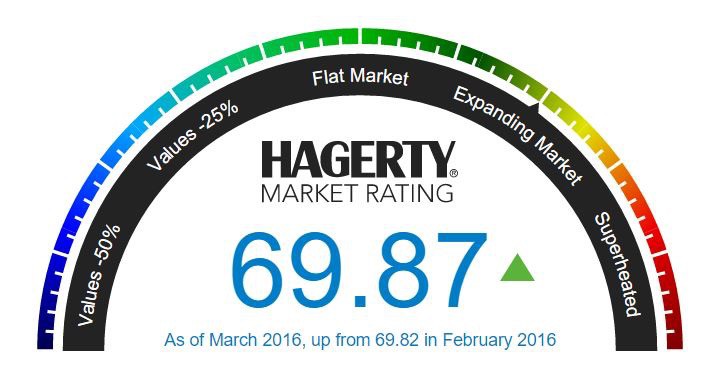 After its largest drop, the Hagerty Market Rating is up 0.05 percent for March, and the calculations were done before the classic car auctions last weekend on Amelia Island or at Kansas City, both places where record sales totals were posted.

The February rating, recently adjusted to 69.85 because of the release of federal inflation numbers, had showed the largest month-to-month drop in seven years. The preliminary March rating of the health of the collector car marketplace is 69.87.

“Following its biggest month-over-month decline since 2009, the Hagerty Market Rating stabilized in March in large part due to strength in public auction activity,” McKeel Hagerty, chief executive of the classic car insurance and vehicle valuation company, said in a news release.

“Although the Amelia Island auctions are not included in the March rating — they will be reflected in April — the high-profile sales in Florida demonstrate market strength, especially for rare and high-quality examples.

“Although other components of the rating are flagging, this bright spot does emphasize that the collector car market continues to grow, even if buyers are much choosier than they were a year ago.”

In its monthly news release on the pulse of the marketplace, Hagerty noted that while European cars from the 1980s were particularly strong at auction, they weren’t Ferraris or Porsches but cars from BMW, Jaguar and Mercedes-Benz, which typically posted gains of 40 percent or more in average sales prices.

Hagerty also reported that requests from clients for insured value increases have fallen, both for the broad market and for high-end cars.

Non-automotive economic factors influencing the March numbers include a volatile stock market and an increase in the price of gold.