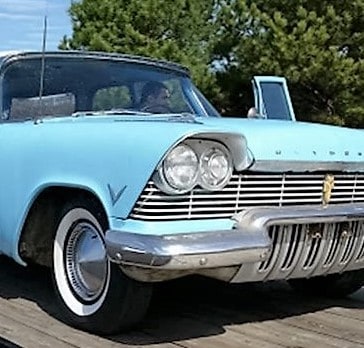 The exuberance of the 1950s, when folks were moving to the suburbs and all things seemed possible, can be summed up with such cars as this gigantic station wagon with tailfins.

Today’s vehicles are all about trim styling and efficient performance, so the Pick of the Day seem might like some outlandish dinosaur. But big wagons have turned hip, making such baroque barges as this 1957 Plymouth Suburban look just as cool now as they did when they rumbled out of Virgil Exner’s Chrysler styling division.

The Plymouth Suburban sports a pair of towering fins

The ’57 Plymouth Suburban was a mighty piece of work, a bold exclamation point for the Leave it to Beaver era as the U.S. auto industry finished up the ‘50s in grand style. The Plymouth’s brassy styling and family-size interior hit the spot.

This Suburban is an all-original survivor in good condition, according to the listing on ClassicCars.com from a classic car dealer in Simpsonville, South Carolina. It looks very sharp in the photos with two-tone blue-and-white paint, lavish chrome and fins that tower along either side of the broad cargo hold.

“This car is very much all original and in great shape,” the seller says. “A driver-quality car that is nice enough to be able to restore to show. She starts right up and runs down the road as she should.”

The wagon is powered by its original 301 cid V8 with automatic transmission, the listing says, and despite having 90,225 miles on its odometer, is presentable and ready to drive. The body has no rust-through, the seller adds, although there are some small repair patches on the floor.

The interior is well-preserved, though it has new rugs and a replacement front-seat cover, the seller says.

With a price tag of just $15,990, this would be make a fun ride for loading up with friends and family and taking a Sunday cruise. It also seems like a car that could be driven and enjoyed while the new owner gradually turns it into a preservation showpiece.