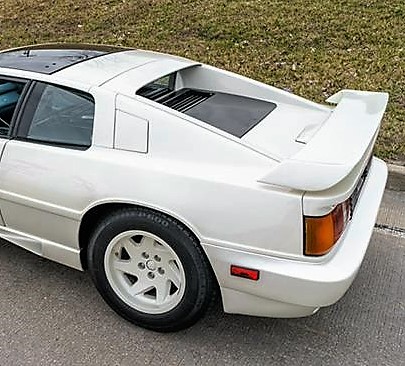 If you’re following the collector car auctions going on this week in and around Amelia Island, Florida, then the hefty prices being paid for exotic cars are likely making your eyes cross. I know they’re doing that to mine.

But if you still crave some swoopy European sports car, the Pick of the Day could fill the bill without causing too much financial pain: a 1988 Lotus Esprit with an asking price just under $30,000. That’s a far cry from the scary six- and seven-figure results for some of those auction cars.

Plus, this Esprit has been driven only 27,458 miles since new, according to the St. Charles, Missouri, dealer advertising the Lotus on ClassicCars.com.

The Esprit was a landmark sports car originally styled by Giugiaro and later updated by Peter Stevens with the popular wedge look and covered headlights of the era. A 215-horsepower turbocharged 2.2-liter four provides plenty of motivation for this lightweight mid-engine coupe, with a zero-60 time around six seconds and a top speed of 150 mph.

But the Esprit was best known for its remarkable handling, which serves to define Lotus as a builder of exceptional sports cars and race cars.

The body and interior look totally fresh, as befitting a car with such low miles, and the photos show it’s just as clean under its hood.

The Lotus Esprit has remained under the radar among collector cars, which has kept its value down compared with such contemporaries as the Ferrari 308. But it could be just a matter of time before these spirited British classics that are so much fun to drive finally catch on among collectors.

Or as the seller noted, “These cars will never get cheaper than they are now, rarely seen and a blast to drive.”