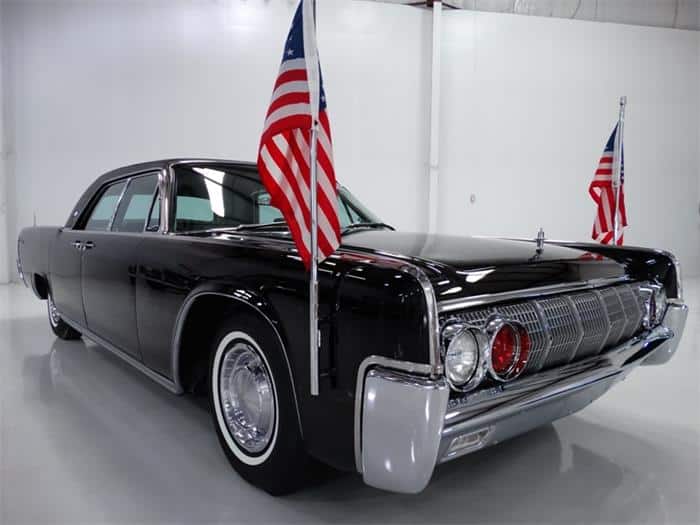 A lot of enthusiasts collect cars that have helped shape their personal history, whether a significant moment in life, something they admired as a child, or the car a mom, dad, or grandparent drove. Cars have always had an impact on society and history, but it’s not every day a collector will find a car that played host to a U.S. president and thus had a role in the nation’s history.

Listed on ClassicCars.com, our Pick of the Day is a 1962 Lincoln Continental Presidential Town limousine that was used by President John F. Kennedy and his administration. This Continental is one of only three built by presidential coachbuilder Hess & Eisenhardt and has a documented history from the moment it went into service for the Kennedy administration in August, 1962.

Front of the presidential car

According to the listing on ClassicCars.com, the car is black with black leather in the front and features light blue cloth and leather in the rear. Like the two sister cars built by Hess & Eisenhardt, #424232 has all the presidential amenities of the time, including a rear-center arm rest telephone, front/rear seat partition with division glass, front chromed flag stanchions, and the all-important flashing red headlamps.

Additionally, the wheelbase was extended to 131 inches. Power comes from a 430 cid V8 that pumps out 300 horsepower. The V8 is mated to a 3-speed automatic transmission.

The listing says that this Continental was used in New York by President Kennedy just seven days before his assassination November 22, 1963, in Texas. This was the president’s main limousine while X-100, the bubble top Lincoln he was in when he was slain, was mainly used for parades.

After the Kennedy administration, #424232 was used through the Lyndon Johnson administration and retired in 1974 when it was then sold back to Ford Motor Company.

During its years of service, the Continental was cared for by Calvin S. Beauregard, former Ford executive and manager of public affairs, transportation division, who eventually purchased the car from Ford. The car moved to Arizona and was later sold to Beauregard’s neighbor, Dr. Francois Theroux until purchased by the current owner.

The Continental is being offered by a dealer in St. Ann, Missouri, for $299,000. Along with the car, the next owner will receive the vehicle’s full documentation from Ford.

To view this listing, see Pick of the Day