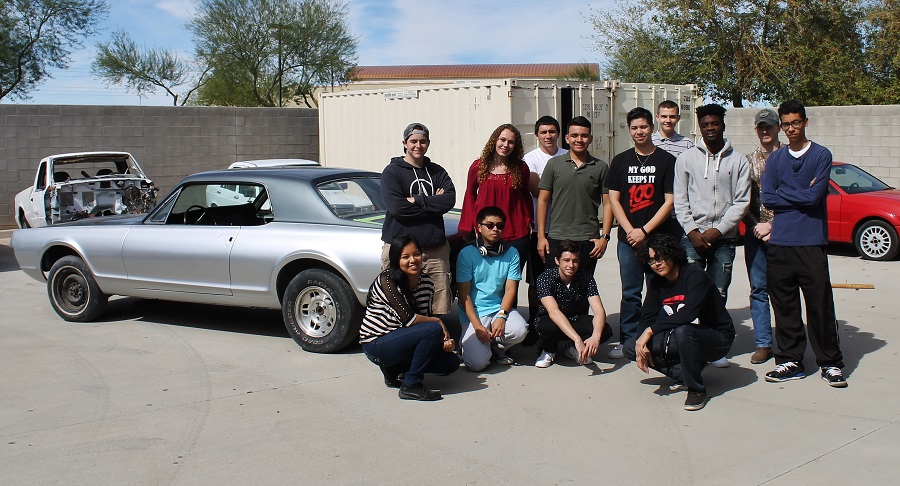 For over 30 years, pre-1972 antique, vintage and collector cars have competed in the Great Race, a competitive but speed-controlled endurance road rally that takes place each year on over 2,000 miles of public highways across the United States. For some participants the $150,000 in prize money is motivation to compete while others do it for the driving experience and to witness so much of the American landscape first hand.

But for a group of students from Dysart High School in El Mirage, Arizona, the Great Race figures to be a once in a lifetime opportunity to celebrate the completion of a year-long project into which they have poured hearts and souls.

Guided by Kurt Woods, their automotive instructor, students in the automotive program have been restoring a 1967 Mercury Cougar with support from the Automotive Restoration Club of Sun City West, a well-known retirement community. ARC is a non-profit that has raised funds to sponsor the student vehicle’s entry fee for the Great Race.

In addition to learning about vehicle mechanics and getting hands-on experience, the students are gaining an even more important set of skills: self-confidence, tolerance, adaptability, collaboration, professionalism, critical thinking and innovation, a sense of financial responsibility, ethic practice, initiative, self-direction, and strengthening their written and verbal communication skills.

“You can make any one of these projects successful by getting adults together and making it happen,” Woods said as he glanced around the automotive shop, “but I am building their confidence so they can leave a situation where adults are always protecting their ventures to the point where if they fail, they kind of pull them back up and cover up the things they didn’t do right. I like to see my students leaving here with this attitude of ‘hey, I tried and it didn’t work,’ or ‘I almost got it to work,’ or ‘I was successful the third try,’ so when they get into the world and it’s hard, they don’t give up and (will) keep going forward.

“The goal here in my shop is always to try, but try with all the skills you have and make sure you are doing the best you can without cheating or doing anything illegal” Woods added.

These lessons also have been learned in student-organized car shows. Woods explained that some of the shows have been complete flops, but that the students built on the experience, learned from their failures, evaluated and built from there.

The biggest challenge for Andy Nguyen, a senior, presented itself as he and other students noticed dents and rust spots when they started sanding the Cougar. “We went over it (the car body) and felt the high ends and low ends,” Nguyen said. “When we couldn’t figure out what to do, Laurence from ARC showed us this spray that showed up pink in high spots and gray or black in low spots.”

Nguyen described using body filler where it was needed and the process of sanding over it to make the body smooth and even, adding that he and other students also were able to go to the paint booth where, “We actually got to learn how to spray the car. It took me a few tries but it was really fun.”

Pride and camaraderie showed as Nguyen attributed most of the primer paint work to Christopher Bernel, a junior, adding that, “He got the job done. We were so proud and ended up staying late after school to finish the car. Laurence came back to check on the car when we were done and said it was actually good.”

Bernel said that helping prepare the car for paint and spraying primer has been a highlight. “The project is teaching me communication,” he said. “I don’t like to talk but I have been so involved and ARC helps me out a lot, so we go back and forth a lot on how to do stuff.”

After the car was primed it was sent to West Mech, a different school in the district, to be painted. The car was gone for two weeks.

“It was the most boring two weeks of my life,” Nguyen said, adding that he and his classmates worked on a computer program to refresh their mechanical knowledge of the different vehicle systems so they could get the car up and running.

Classic Car News was with the students as they first saw the Cougar in paint.

The students were all smiles as they admired the glistening two-tone silver and black colors. Some took photos with their smartphones while others were hesitant to touch the newly painted surface. The moment was made even more special as students learned that prior to the car’s return to Dysart, one of the car club volunteers had taken the freshly painted car on a trailer from the paint booth to a local show where it won an award sponsored for being the “best under-construction car.”

Eager to continue working on the car, the moment passed and the students pushed the car inside the school’s shop and onto one of the lifts where the wheels were removed and students assigned to working on the brakes got to work.

One of those students was Quinci Rust, a senior and one of two girls working on the project. Rust said learning about the brakes has become one of her favorite parts of the project.

“Time is crucial for us,” Nguyen said. “When we started working on the project we knew we had class time, but that’s only one hour so we usually come in and devote another two or three hours after school every day.

“With the time limit we have for this project, every hour makes a difference. We need to get it up and running, get a few miles in the car and work out any adjustments or tweeks before its ready for the race. Time is just crucial.”

Students manage a working checklist to keep track of what has been done to the car and what still needs to be done, as well as material that needs to be reviewed before a student can work with different components.

Some students, such as Christopher Noble, a senior, aren’t able to come in after school all the time because to work or various responsibilities.  Noble said that because of his work, time management has become a challenge, and that he enjoys “being hands on with the car instead of sitting with the computer reviewing material.”

Noble added that funding has proven to be a challenge and makes time management more difficult. “The Cougar is a school assignment in a school-led program,” he said. “It’s a lot harder to get stuff done because we have to make phone calls, get administration to approve getting a part we need, and stuff like that.”

According to Woods, Dysart High School is a “title one school, meaning the kids are either on free of reduced lunches.” Most of the materials used in the automotive program have been donated, including the Cougar.

“We don’t buy cars, whatever comes our way is what we work on,” Woods added.

“At least 30 kids have had their hands on this car just from Dysart and I know around 18 kids from West Mech were involved in the paint process,” Woods said, adding that with more adult volunteers the program has the potential to do three or four projects a year and more students would be able to get involved.

“These projects get the kids to use their brain to put something together with their hands,” he said. “It gives them an idea of why they are here studying math, science, and why it is important they write and speak well and do presentations. All of those are addressed in this class and helps put why they are in high school into perspective.”

Woods will be the primary driver of the car during the race with Nguyen, Rust, Bernel and Nobel taking turns as navigator. The students already are reviewing the Great Race rules and practicing navigation skills with mini-rallies around El Mirage. The car is on track to be completed by March 20 and ready for its licensing inspection.

Woods said members of ARC routinely stop by and use their experience to help talk the students through different tasks. The familiarity helps break down generational communication barriers.

But it is the students who, according to Woods, “bust knuckles and turn wrenches” and who will be graded on how well they understand their assigned system of the car.

“We have people to help them and other resources, but they are still working on it for a grade in the class.”

Because of ARCs involvement, one of Nguyen’s favorite parts of the project is meeting club members and making connections with local car clubs. Because of the Cougar, he has discovered a connection with car enthusiasts of all ages.

“We all found a bond and have that one special connection,” he said.