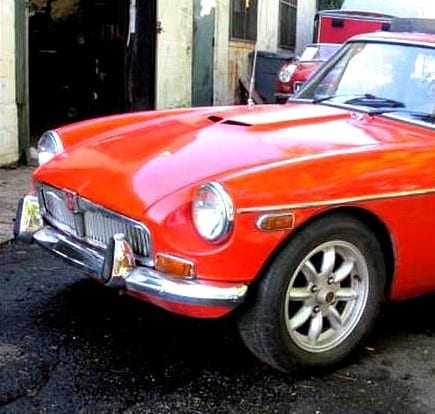 The classic MGB has always been an attractive and affordable choice for sports-car fans, but with one complaint: it could use more power. The 1.8-liter 4-cylinder OHV engine is a sturdy unit with 92 horsepower, but the sleek little B would be better with more.

The Pick of the Day seems to address that issue. It’s a 1971 MGB GT hatchback coupe with a 2.8-liter V6 from a British Ford Capri (sold in the U.S. as a Mercury) transplanted under its hood that brings 150 horsepower to the package.

The V6 installation looks clean in the photos, nestled in as if it had always been there. The seller listing the MG on ClassicCars.com says the engine is fitted with a four-barrel carburetor, custom headers, high-flow exhaust, cooling-system upgrade and other features.

The four-speed manual transmission comes out of a Mustang II and is linked to a narrowed Ford rear axle with a 3.09:1 differential, making the car a relaxed highway cruiser in fourth gear, says the seller, a classic car dealer in Stratford, Connecticut.

MGB GTs are cool-looking cars; little-known fact is that Italian design house Pininfarina created the styling for the enclosed cabin, which was then integrated with the MG roadster body. The small scoop on this car’s hood, apparently required to clear the V6 air cleaner, looks good and gives a hint of what lies beneath.

Besides the engine transplant, the MG has been restored with a red paint job, black interior and a desirable Wabasto fabric sunroof added, according to the seller. The car is shown with sharp-looking Minilite wheels, which the dealer says could be substituted for a different set of alloys, also shown in the photos. I would go with the Minilites.

The car also has been fitted with gas shock absorbers in place of its antiquated level shocks, the seller says, which would improve the already agile handling.

There are plenty of MBGs with engine swaps, such as those with the appropriate aluminum Rover V8, a setup that once had been headed into production but sadly yanked after only a handful were built. The production MGC came with a more-robust straight-six, but with some compromises in balance and handling compared with the four-cylinder B.

This looks like a good custom B, and the asking price is just $13,900 for what the seller calls “a very interesting, modestly priced, high-performance classic GT car.” I would have to concur.