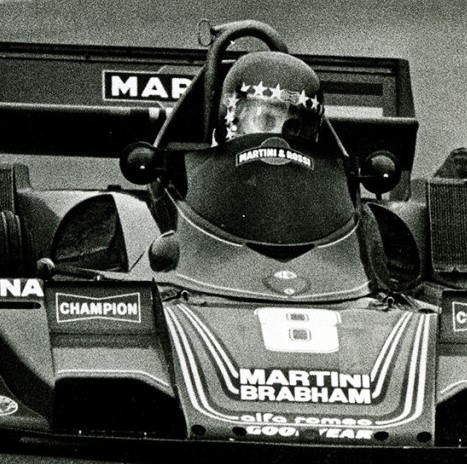 Hans-Joachim Stuck thrilled the soggy fans at the 1977 Grand Prix of the United States at Watkins Glen with his dominating performance of wet-weather driving, besting the pack that included reigning Formula 1 World Champion James Hunt.

Stuck drove an Alfa Romeo-powered Brabham BT45B, which he put on the front row and led the rain-soaked race until mechanical trouble ended his run in the 14th lap.

That legendary race car is on permanent display at the Alfa Romeo museum in Arese, Italy, near Milan. But next month, the Brabham will appear at the Amelia Island Concours d’Elegance in Florida as the centerpiece of the Cars of Hans Stuck Class.

Stuck, a two-time winner of the 24 Hours of Le Mans and the 1985 World Sports Car champion, will be there as well to serve as the official honoree for the 21st annual concours, March 11-13 on the Ritz-Carlton Resort’s golf course.

Perhaps not as well-known as last year’s honored guest, Stirling Moss, Stuck reigned as one of the most successful, versatile and popular international road-racing stars of the 1970s, ’80s and ’90s.

“I was at Watkins Glen in 1977 and have great memories of Stuck’s Brabham and the great sound of that 12-cylinder Alfa Romeo engine,” said Bill Warner, founder and chairman of the Amelia Island Concours d’Elegance. “He led until the gear-shift linkage broke. Hans was magical in the wet. I think we’re going to have some serious fun when ‘Stuckie’ arrives at the Ritz-Carlton.”

But the Brabham is perhaps the most famous of the cars raced by Stuck over the years that will appear in his special concours class.

“We’re honored that Alfa Romeo has sent this car from their fabulous museum in Arese, Italy, to honor Hans Stuck,” Warner said.

In his first American competition, the 1975 12 Hours of Sebring, Stuck raced to victory with teammates Brian Redman, Sam Posey and Alan Moffett in a BMW 3.0 CSL, which also marked BMW Motorsports’ first international win. Posey, who went on to become an accomplished automotive and motorsports writer, recounted his experiences as Stuck’s teammate.

“BMW put our names on the doors of our cars, and Hans would get so sideways I could read his name – and this would be at 140 mph,” Posey, Amelia’s 2013 Honoree, is quoted in a news release. “Where others saw risk, Hans saw fun. Flinging those CSLs around was play time, and I swear I could hear yodeling coming from his car.”

For more information about the Amelia Island Concours, visit the event website.