My great uncle, his Rolls-Royce, and his recipe for chicken divan 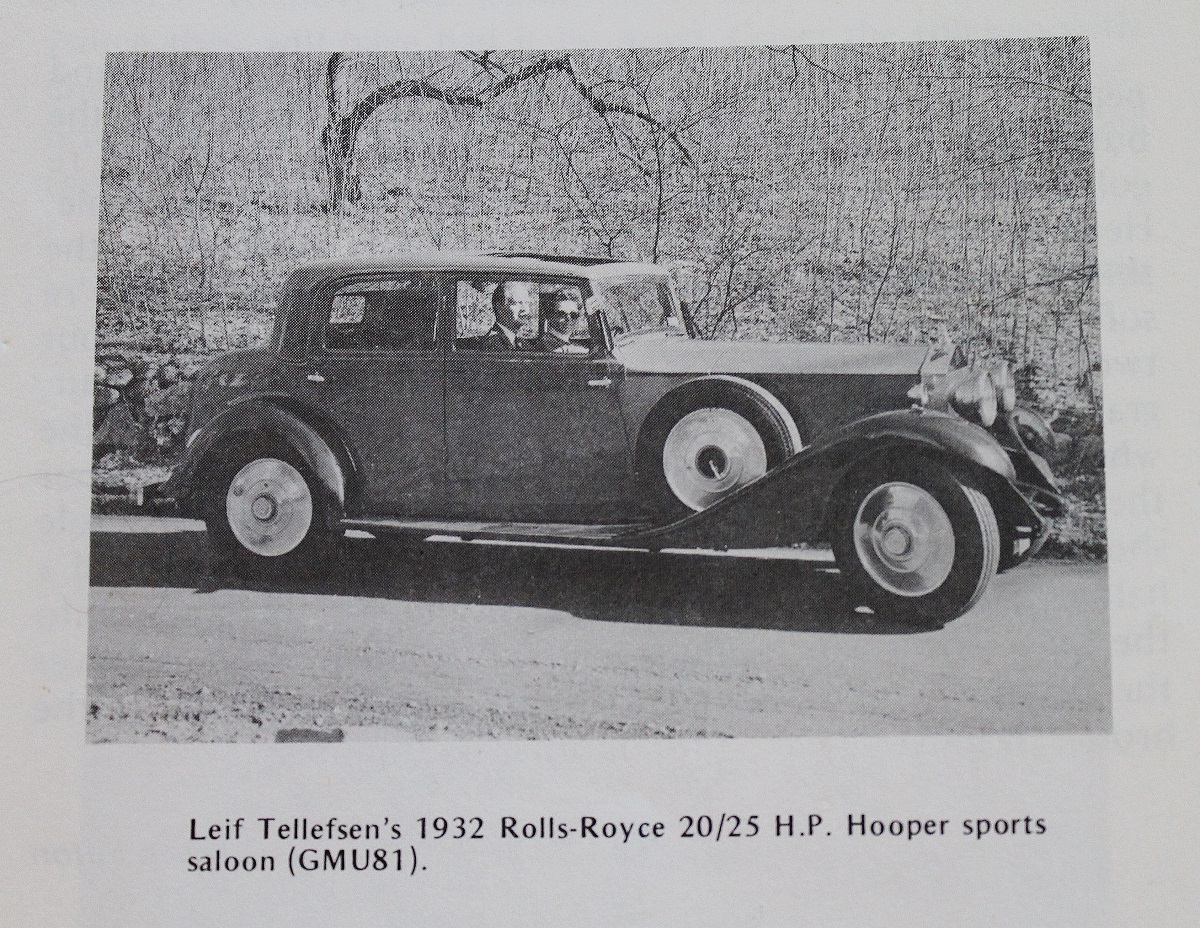 According to the Rolls-Royce Owners Cookbook, printed in 1975 and featuring recipes from the Atlantic Region Rolls-Royce Owners Club, to make chicken divan you simmer six to eight chicken breasts in water, adding broth, onion, carrot, bay leaf, and pepper.

“You continue to simmer the chicken for about an hour, or until it is tender. After the chicken has cooled a bit, skin it, strip the meat from the bone, and lay it aside. Also lay aside the broccoli, which you will have cooked and salted lightly.”

To me, a 20-something, following some recipe out of a 41-year-old cook book, was more than a bit odd. The recipe and directions felt outdated. But I was determined to follow them because this wasn’t just some random recipe from some old book, it was a recipe contributed by Leif Tellefsen, the owner of a 1932 Rolls-Royce 20/25 H.P. Hooper Sports Saloon.

Oh, and Leif Tellefsen was my great uncle.

About a year ago, Leif Tellefsen died, at the age of 88, in Poughkeepsie, New York. After his death, the Rolls-Royce club cookbook arrived at his sister’s house. His sister, of course, is my grandmother, and she figured I would love the book and passed it along to me.

I never knew my great uncle, though my grandmother would mention him occasionally. One story she shared was about how he had an old Rolls-Royce that had broken down as it was carrying my aunt to her wedding.

“For the hollandaise sauce,” the recipe continued, “mix and heat the mayonnaise, cream of chicken soup, Worcestershire sauce, heavy cream, and sherry. Lay this aside while you stir together the egg yolk, butter, and lemon juice. Now put ‘em both together.”

I’d never even seen a photograph of my great uncle until the cookbook arrived. In it, a black-and-white image shows him sitting proudly in the driver’s seat of his Rolls-Royce. The photograph is on the page opposite his recipe for chicken divan.

The image, the book, and the car all seemed so mysterious to me and ignited my curiosity to know who he was.

Born February 23, 1926, in Grimstad, Norway, Leif immigrated to the United States in 1932 when he was 6 years old. He served in the Army during World War II, from 1944-46, in the 70th Infantry Division, known as the Trailblazers, as an initial group of replacements during the Battle of the Bulge. During the war his division entered Germany and became known for crossing the Saar River to capture the city of SarrBruken.

Post war, Leif graduated from the Pratt Institute in New York and worked at IBM Poughkeepsie from 1953-87, retiring as a mechanical engineer. Additionally, he had been a member of several golf and tennis clubs and the Rolls-Royce Club.

“Spread the broccoli in a large buttered dish, cover it with the chicken, and pour the sauce on top” the recipe continues. “You might want to garnish with whole button mushrooms. You will want to sprinkle the cheddar and parmesan cheese on it before baking for 25 minutes at 350 degrees. After 15 minutes, add some more sherry. Incidentally, you may prepare all the fixings a day in advance and bake it just before serving – ideally, with wild rice mixture, salad, and rolls.”

Yearning for the small details, I found myself in a peculiar place. Here I have this book, with a photo of a relative in a beautiful classic car, and yet I knew nothing about him other than the basic life facts that make up only the outer shell of an individual.

As I continued to ask questions, his personality and legacy survive through that car. The stories I was told all involved the Rolls-Royce, how immaculately he kept it, the different road trips he took, the philanthropic things he did with the owners club, the special occasions when it was used to celebrate momentous family events.

My own father only met Leif once, and as a small child, but he knew of him through the stories passed along by my grandmother.

My dad confessed that he had heard a rumor that after Leif died, the Ross-Royce was left to his children, none of whom car people and who wanted to sell the car. Somewhere in that selling process, one of them  drove the car through a wall, effectively destroying it.

I do not know the car’s condition or even where it might be. However, Leif’s Chicken Divan will forever live on. In my attempt to follow the recipe, I cut the chicken into bite-size pieces instead of leaving whole, did not pre-cook the broccoli before putting it in the baking dish, used half-and-half instead of heavy cream, added chopped mushrooms for garnish, and did not add extra sherry while the dish was baking. Despite my personal dislike for mayonnaise, I used the seemingly excessive amount as instructed and, much to my surprise the meal was fantastic.

Would I make it again? Sure, but with more modifications to make it a little more health friendly than the original recipe, and with perhaps another dash of pepper.

While focused on my career, school, friends, cars and day-to-day life, I find the retelling of the story of Leif and his car to be profound. I wonder if my involvement with the car community will be what my grandchildren, nieces and nephews know of me someday.

I hope they also will appreciate being proud of your car, enjoying road trips, doing good works with car clubs, and even the job of simply standing around in a parking lot and sharing your car stories.

I am a car enthusiast, the byproduct of another car enthusiast (my dad), and it has been great to learn of a strong connection, a passion for cars that runs back through the generations and connects us in yet another way.