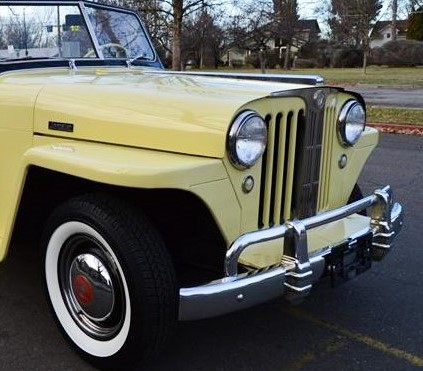 The Willys Jeep was still being lauded as one of the true heroes of World War II when the small automaker decided to come out with a more-civilized version designed for the family man.

The Pick of the Day is one of those, a 1949 Willys Overland Jeepster that the seller says is a clean and rust-free Arizona car that is all ready to drive with the top down. These quirky rear-wheel-drive roadsters might not have the four-wheeler credentials of the classic CJ, but they do make a statement all their own.

The Jeepster listed on ClassicCars.com is offered by a Boise, Idaho classic car dealer who says it is highly original and was recently purchased from an Arizona retiree.

“The Willys Jeepster was designed to appeal to American GIs returning from WWII who were looking for a sporty version of the bulletproof Willys Jeeps they had driven and maintained throughout European battlefronts,” the seller states. “It is extremely rare as only 2,307 Jeepsters were built in 1949 with the “Go-Devil” 4-cylinder motor.”

The Go-Devil engine is the original-type flathead four-banger that powered the WWII Jeeps, and while it is a solid motivator, it’s not going to win any prizes for performance. Some wags say the name means it has a hell of a time getting up hills. Not strictly true, and the Jeepster is equipped with an overdrive manual transmission that should make highway cruising fairly effortless.

The Jeepster gets its roadster derivation by not having rollup windows and such, having a removable fabric top and window curtains for driving in inclement weather, just like the regular Jeeps. The deployed rainy-day equipment looks good in the many photos that accompany this ad.

Everything about this Willys is in great condition and in perfect running order, including a fresh set of Coker Classic tires, according to the seller, which makes it seems like a bargain at $19,900.

Though lacking off-road capability, the Jeepster looks like it could blaze a trail as the hit of the next local car rally or cruise-in.

As a side note, there’s always much discussion as to whether Willys should be pronounced as “willies” or “willis.” I’m all for the latter pronunciation.