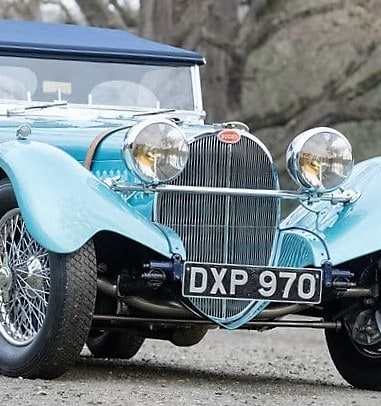 Certain to be a star at the Amelia Island, Florida, collector car weekend next month is this pre-war gem, a 1937 Bugatti 57SC Sports Tourer with one-off coachwork by Vanden Plas. The car will be auctioned March 10 by Bonhams.

The supercharged straight-8 Bugatti 57SC, chassis 57541, is valued at $11 million to $13 million for what is considered one of the greatest pre-war sports and competition cars, according to Bonhams, with this example wearing an exceptionally handsome and unique body.

And it’s no show queen, having competed successfully in racing events before and after the war.

“Rare, luxurious and extremely fast, the Type 57S was considered the ultimate automobile of its day, with its sophisticated surbaissé low-slung chassis, dry sump lubrication and distinct V-shaped radiator,” Bonhams said in a news release. “Virtually a Grand Prix car in touring guise, nothing else in the world compared.”

The Bugatti has a well-known history and is in “impressive mechanical, structural and cosmetic condition,” Bonhams says.

“Its unbeatable combination of coachbuilt body and 1930s performance underpinnings result in a car of the highest known standards of the time,” according to the auction house. “Athletic and tremendously aesthetic, this is the rarest of the rare and represents a once-in-a-lifetime opportunity.”

The Bonhams auction, held on the Thursday before the 20th annual Amelia Island Concours d’Elegance on Sunday, will offer about 100 classic and exotic vehicles along with a number of automobilia pieces, including an impressive array of vintage toy peddle cars.

For more information about the Bonhams sale, see the auction website.