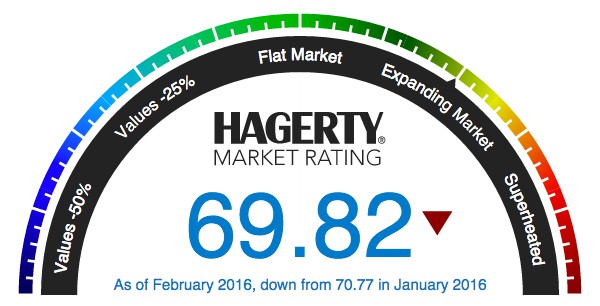 Hagerty’s market rating for February not only is down for the third month in a row, but the drop from January is the largest one-month tumble since 2009, the classic car insurance and value-tracking company said in a news release Wednesday.

“This year started out with more questions than answers,” McKeel Hagerty, the company’s chief executive, is quoted in the release.

“Market observers are concerned with global currency fluctuations, the recent drop in oil prices and stock market volatility. These concerns undoubtedly caused some people to be more cautious with their bidding in January. However, the total dollar sales at public auctions can be misleading until you take a deeper look at different segments of the market.

“The highest-selling, world-record vehicles are big news in the classic car space.” he continued. “However, vehicles selling for more than $2.5 million constitute only 0.2 percent of the vehicles sold at public auction during the past three years. Yet, these same vehicles account for 20 percent of the total dollars reported each year.

“It doesn’t take much of a change to this tiny slice of the market to have a more noticeable impact on the overall sales results.

“We have been predicting a non-economic market slowdown for more than a year,” he noted. “It has to do with the fact that many of the top increases have been driven by the best examples of the best cars – cars that aren’t traded frequently (such as the recent sale of a Ferrari in Paris that had the same owner for more than 40 years). The recent strength of the market brought many cars from long-term ownership to market, and those cars found new garages where they are likely to stay for a long time.”

On the other hand, Hagerty continued, “Vehicles trading for less than six figures are currently the healthiest segment of the market, as well as the largest. There are several cars that, until recently, collectors dismissed as ‘someone’s used car,’ but are now showing noticeable market movement.

“Examples include 2000s-era Pontiac GTOs, 1982-1992 Pontiac Firebird Trans Ams, Nissan 300ZXs and BMW Z3s, which are all up double-digit percentage points compared to a year ago. While they haven’t appreciated beyond their initial purchase price, it signals strong enthusiast interest now that values are starting to climb.

Hagerty’s revised market number for January was 70.77. It’s initial February figure is 69.82. But while the number dropped, it remains strongly in the “expanding market” range, still well above being “flat.”

The highest rating since Hagerty began its research was 72.4 in May 2015.

After a slight increase in January, expert sentiment, one of several factors Hagerty considers in its analysis, “weakened for its largest drop in 27 months,” the news release said. “A common opinion was that the highly visible Arizona auctions confirmed that the market has slowed.

“Market observers looked to the January auctions as the event that would confirm the arrival of the market slowdown they had predicted over the previous year. The decreases in the overall numbers as well as the tepid performance of previously red-hot models like the Porsche 911 and Ford GT, among other factors, confirmed that prediction.”

Private sales activity fell to a 17-month low, Hagerty reported, with the average sales price down by 2.5 percent in just the last month.