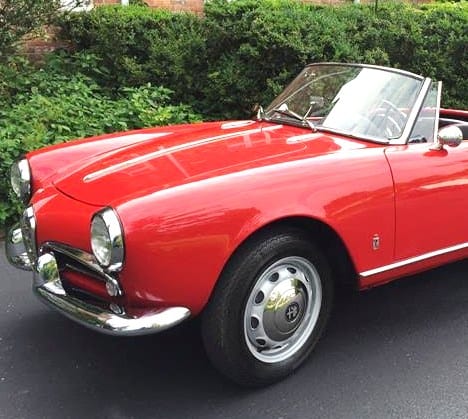 The Italian expression La Dolce Vita translates to English as “the sweet life.” This is the Italian concept of enjoying your surroundings and taking in the beauty of the world around you, usually with a companion of the opposite sex to enjoy it with.

This Italian concept translates into the way Italians do everything, from the way they dine, to the way they design transportation; think two-wheeled transportation named Vespa to open sports cars named spiders. I can think of no other car that better exemplifies the idea of La Dolce Vita than the Alfa Romeo Giulietta Spider.

The Pick of the Day is this stunning 1960 Alfa Romeo Giulietta Spider located in Sylvania, Ohio. The Giulietta Spider was a landmark car. Introduced in 1955, it was Alfa Romeo’s first mass-produced car and a winner from the start.

The stunning styling of the Spider was by famed Carrozzeria Pinin Farina (the name was two words before the company merged them into one).  The car was not just a pretty face but used Alfa’s new aluminum twin-cam engine and was available in both a single carburetor Normale version and the twin-carb Veloce version.

The car included a number of groundbreaking ideas, especially for a mid-priced sports car, including a folding soft top that is the model of simplicity in use, roll-up windows and a comfortable driving compartment. If you consider other cars of the period, such as MGA and Triumph TR3, the Alfa was light years ahead.

This 1960 Normale example is one of the later 101-series cars, which received a revised interior along with some minor styling changes, things that made the already great car even better, especially for taller drivers and passengers.

According to the seller’s listing on ClassicCars.com, this car is in overall excellent condition and the interior has been recently restored, including new seats, door panels and carpeting, all appearing to be done with correct-type materials. The dashboard and gauges also have been restored, and the body has received a professional respray.

These are amazing cars to drive, nothing like an MG or a Triumph, more like a smaller Ferrari or Maserati, with glorious-sounding engines that beg to be revved to their 7,000 rpm redline. The Alfa has one of the finest chassis of any open car, no matter what the era. The wind in your hair combined with the engine sounds make for an exceptional driving experience.

The pictures really tell the story with this example, and the car looks like to be in nice driver condition that would not embarrass its owner at an Alfa Romeo national meet.

These Giulietta cars have been moving up in value during the past few years, and this one priced at only $57,900 looks to be a good car at a fair price.

If you have always dreamed about touring in an Italian roadster with the top down and your significant other at your side, then get ready for summer with your very own piece of La Dolce Vita.