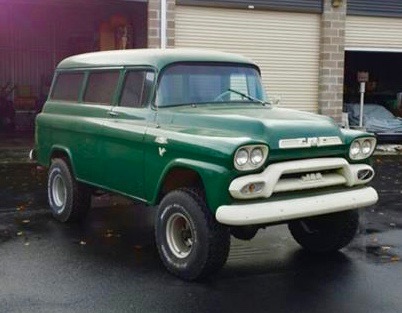 Once upon a time, back in the post-colonial days, several of the states we now consider to be Midwestern weren’t states at all but were part of the Territory Northwest of the River Ohio, which more commonly was referred to simply as the Northwest Territory. Thus a college just north of Chicago known as Northwestern and several companies bearing that name, including Northwestern Auto Parts Company of Minneapolis.

Founded early in the 20th century and more commonly known by its initials, NAPCO produced four-wheel-drive systems for military use during World War II. After the war, its kits could be installed on various trucks, and in the mid-to-late ‘50s were installed right on the GM assembly line as optional equipment.

Which brings us to the Pick of the Day, a 1959 GMC Napco panel wagon owned by the same family since new.

According to the advertisement on ClassicCars.com, this GMC wagon not only has a Napco 4×4 setup but an optional and factory-installed expanded fuel tank.

The seller says her husband’s grandfather ordered the truck and had it specially outfitted for hunting trips into Canada.

“My husband inherited it over 20 years ago and restored it,” the seller notes. “He had it lifted, windows tinted, and repaints and some other minor work done by Behrends auto body. It’s been stored indoors since with an occasional drive out and about here and there. It runs great and gets a lot of attention.”

The ad notes that the truck has been well maintained, has low mileage (less than 60,000), and is “a beautiful ride and gets attention wherever it goes.”

So why is it being sold?

“My husband recently passed away and I can’t store it any longer so it’s time to let it go,” the ad reports.

The ad notes that the truck rides on aftermarket wheels, has leather seating, an AM radio, its original V8 engine and manual transmission.

The truck is located in La Center, Washington, which really is in the northwestern part of the country. The asking price is $46,000.

Question of the Day: What is your preferred brand of mufflers?