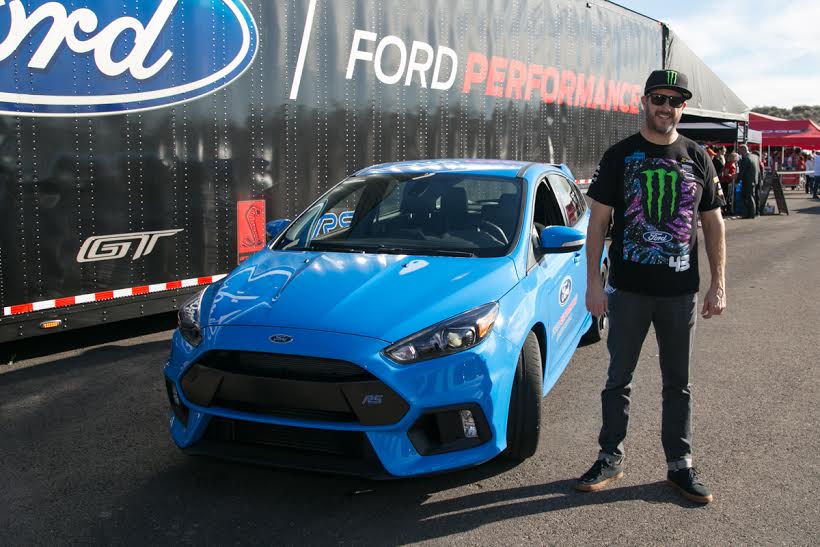 Ford has produced the Focus RS for some time, but only for the European market — until now. At the recent Barrett-Jackson Scottsdale auction, the first North American 2016 Ford Focus RS crossed the block and brought $550,000 for the Juvenile Diabetes Research Foundation (JDRF). Ken Block was there to talk briefly about the car and to help boost the bidding to benefit charity.

Prior to the sale, Classic Car News met up with Block at the ride-and-drive track at WestWorld, to see the car and experience its capabilities with Block behind the wheel.

The 2016 Focus RS features a 2.3-liter turbocharged EcoBoost engine with 350 horsepower and has advanced performance features and drive modes, including an industry-first “drift” mode. The RS comes standard with a 6-speed manual, a torque-vectoring system and all-wheel drive. The rear wing has been designed for added downforce and the suspension stiffened with two-mode switchable shocks.

CCN: How did you get involved with the Focus RS project?

Block: I have an amazing partnership with Ford where I get to drive some incredible race cars and production cars. Ford has moved me to help develop production cars so I have been involved in the RS program for three years. I have a design background, industrial design and architecture, so to be able to get involved with the cars and help with development and consult on everything from what the car does to design elements has been very cool.

CCN: What kind of cars are you mostly interested in?

Block: I am mostly interested in anything that really is fun to drive but in a way that I think is fun to drive cars — like the all-wheel drive, high-performance type cars I have used for rally, rally cross and gymkhana, such as the Fiesta I have been racing for many years, the Focus RS and even back to the older cars like the RS200 and the old Escorts.

CCN: What made you want to use a 1966 Mustang as the Hoonicorn in Gymkhana 7?

Block: I wanted something that when made into an all-wheel drive car would be totally unexpected. Since none of the Mustangs have ever been all-wheel drive it meant I could use this very cool, very tough old car and drive it and do things that have never been done before. It was a fun marriage of new modern technology with this really old tough look.

CCN: Do you think using an old domestic vehicle helps bridge the millennial gap and gets younger people into older cars?

CCN: Do you have your own car collection?

Block: No, not really, I’m not much of a car collector but I have a collection of race cars that I have used and have a sentimental value to me. I’ve actually only ever sold one or two cars. I try to keep my race cars from throughout my career. I have nine or 10 cars at this point.

CCN: What’s next for you?

CCN: Do you have any advice for anyone who wants to get into rally?

Block: The simplest advice I have is to go to a driving school. There are plenty of very good driving schools for track-type driving and a couple of really good ones for rally and rally cross. One is called Dirtfish, the other is Team O’Neal. You can waste a lot of time and money if you don’t have the right skills and by starting at a school you learn loose-surface driving which is really good to learn car control, have fun, and a good way to see if you have the skills and passion for it before you go purchase equipment and join a race.