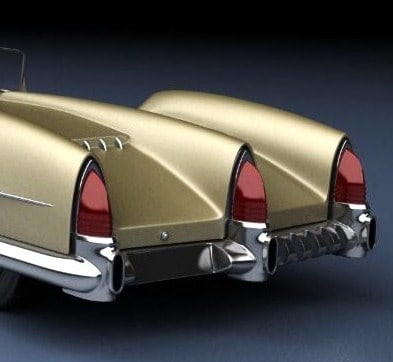 The classic car world is filled with stories, some of them modern-day parables repeated with narratives as familiar as the Bible tales we learned as kids. And there are endless other stories, those that lie under the surface of most vintage cars seen at a show or auction.

But Geoffrey Hacker loves the little-known stories of individual effort and unique vision that surround the privately hand-built “concept cars” of mid-century America. Hacker and fellow enthusiast Rick D’Louhy are obsessed with unearthing these automotive artifacts and bringing them back to their former glory, like master artworks rediscovered and revered.

“We specialize in finding cars that no one else is looking for,” Hacker said. “What we celebrate are hand-built cars.”

The Manta Ray shortly after its completion in 1953 | ForgottenFiberglass.com

The Amelia Island Concours d’Elegance in Florida will feature a special class called Concepts Beyond Detroit that highlights the innovative vehicles that were created in garages and basements across the U.S. rather than by the major automakers. They are maverick concepts that projected a streamlined future of style, performance and efficiency but have been largely forgotten.

The Concepts Beyond Detroit class has been assembled with the assistance of Hacker, who is especially excited about bringing his favorite form of car history to the concours. Each of the cars shown during the March 13 concours is absolutely unique, he said, and will bring a dose of originality to a show field made up primarily of established collector items.

“To appreciate this you have to like unique and unusual cars that you haven’t seen a million times before,” Hacker said in an interview from his home in Tampa, Florida. “Those are all great stories, but they’ve been told. These stories are only now being told.”

Among the cars, built from the late 1940s through the’60s, are such things as the jet-fighter-inspired Manta Ray, completed in 1953 by Glenn Hire and Vernon Antoine of Whittier, California. Hire and Antoine worked on guided missiles and jet aircraft for a living, and it shows in their imaginative rendering of automotive design.

With its chrome-plated nosecone and triple taillights, the Manta Ray looks ready to blast off with rocket power, although under its curvaceous skin lie the frame and drivetrain of a 1951 Studebaker. The show car was highly lauded at the time for its styling and workmanship, and there were even plans to mass produce the Manta Ray using tube frames and Cadillac engines, but that never came to fruition.

Another what-might-have-been concept is the intriguing 1961 Covington Tiburon, designed and built by Henry Covington of St. Petersburg, Florida, and based on the aerodynamic theories of Dr. Augustus Raspet of Mississippi State College. Low and lean with a hinged roof for accessing the two-seat interior, the Tiburon (Spanish for “shark”) was designed to achieve the most speed with the least amount of power, and used ground-effect design to achieve high-speed stability.

The first Tiburon was built on the small platform of a rear-engine 1950 Renault 4CV, with its tiny engine providing enough power to propel the streamlined missile to 74 mph.  The coupe headed for Amelia is based on a Porsche 356 chassis. Novel features included detachable headlights and a steering wheel that swung sidewise to ease entry and exit.

There were 12 Tiburons built – six coupes and six convertibles – and there were plans afoot to produce and sell the Covington car in kit form for various rear-engine platforms, but tragedy ended that effort; Dr. Raspet was killed in a flying accident and Covington died of a heart attack at age 38.

Hacker restored the Amelia-bound Tiburon, which is the only surviving coupe. Two roadsters also survive, plus a roadster body awaiting restoration.

The Ultra Modern Merc was a project undertaken during the 1950s by Leo Lyons of San Bernardino, California, with the help of none other than the King of Kustoms, George Barris, and his brother, Sam Barris.

Built from the bones of a ’50 Mercury, the Ultra Modern Merc was cool enough to make the cover of Custom Cars magazine. It took nine years for Lyons to complete the Merc, which was unveiled in 1959. Hacker recovered the car many years later and reunited it with Lyons.

Other cars that will be shown in the Concepts Beyond Detroit class at the Amelia Island Concours include the strangely futuristic Fascination three-wheeled concept from Sidney, Nebraska, and the Paxton Phoenix built by Robert Paxton McCulloch of chainsaw fame.

Hacker has shown hand-built concepts at Amelia before, he said, though never in a dedicated class for such cars. The Florida concours is known for its imaginative special classes, such as last year’s class for cars that were extravagantly customized for screen-legend cowboys.

Hacker said he has been involved with concours events, including the Pebble Beach Concours in Monterey, California, for about a dozen years, all the while specializing in the oddball specials produced by private builders. He and D’Louhy show off their automotive archeology in a dedicated website, ForgottenFiberglass.com.

“We work and we track down these cars and their histories,” Hacker said. “They are some of the most amazing cars of the ’30s, ’40s and ’50s, and we need to celebrate them.”

For more information about the Amelia Island Concours d’Elegance, see the concours website.