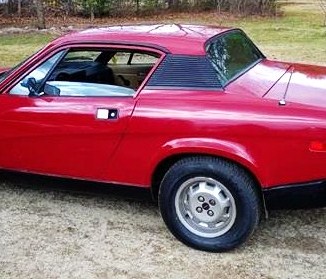 When the Triumph TR7 was introduced in 1975, the ads called it “The Shape of Things to Come.” That was definitely the case as the wedge-shaped TR7 penned by Triumph designer Harris Mann was definitely a futuristic design, taking off from such shapes as those of the Lotus Esprit and Ferrari 308 GT4. Being this divergent from past Triumph design, though, TR7 was not what the average Triumph owner was hoping for, and the sports car was not very welcomed by the Triumph faithful.

The Pick of the Day is a 1978 Triumph TR7 coupe located in Windham, Maine, and is apparently a legitimate one-owner car with just 37,415 miles on its odometer and, according to the private seller, a completely original car that has been garaged since new.

In addition to their controversial new design, early TR7 cars were poorly assembled because of quality-control issues at the factory in Speke, England, which had numerous labor issues which trickled down to how the cars were built.  The later roadsters and coupes, such as this one listed on ClassicCars.com, were built in Coventry, and the quality improved during the car’s production run.

But because of the unusual design and spotty build quality of the early cars, the TR7 has become almost forgotten in the history of the Triumph company. That’s too bad because in many ways, the TR7 was one of the best Triumph sports cars ever created, with modern design and amenities that were absent from every one that had come before.

As a result of this baggage, nice TR7s, and especially the coupes, have all but disappeared from the collector car market after suffering decades of disregard, misuse and lack of maintenance. That makes it very rare to find such a well-tended one-owner TR7 as this 1978 coupe.

This low-mileage example received Ziebart rust proofing when new, says the seller, who touts the extra-low mileage. The car’s Carmine Red body with Beige cloth interior is a nice combination, and both paint and interior look to be in exceptional condition.

Highlighting its time-warp condition, the Triumph boasts an 8-track tape deck in the dashboard, and somehow it still works. Time to bust out those Doobie Brothers and Bob Seger tapes and take it for a spin.

The asking price of $5,500 or best offer seems like a gift, and I cannot think of any better value on a classic British car.