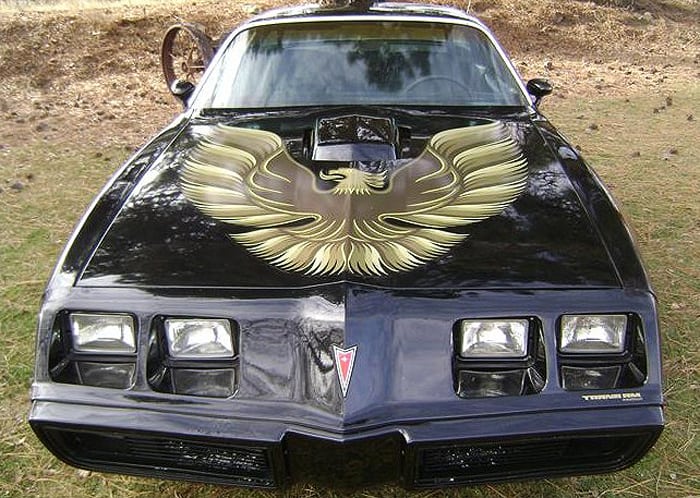 Still steamed that you missed out on that 1977 Pontiac Firebird Trans Am, the Smokey and the Bandit promo car that sold at Barrett-Jackson for a whopping $550,000 while actor Burt Reynolds looked on from the podium?

Fret not because the Pick of the Day is an essentially similar 1979 Pontiac Firebird Trans Am in the same black paint and gold trim. And while this one might not have the celebrity provenance of the Barrett-Jackson car, it doesn’t have the outlandish price tag, either.

Actually, this T-topTrans Am with the screamin’ eagle on its hood is priced by the Redmond, Oregon, car dealer at just $18,900 in the ClassicCars.com listing. So, let’s do the math: 550,000 divided by 18,900 shows that the Bandit car cost 29 times more than what’s asked for this one. And that’s for a promo car, not the one that actually appeared in the movie.

If you don’t mind that this Trans Am has no outright Hollywood connection, you can still feel like a big star every time you fire up that 6.6-liter V8 and hear the four-barrel carb suck the oxygen out of the air. Or stand back and take a gander at those gold-trimmed honeycomb wheels, just like the movie car.

With just under 70,000 miles on its odometer, the Pontiac has a “very healthy rumbling exhaust and performance to back it up,” the seller says in the ad.

For the asking price, you might even consider this Trans Am to be something of an investment, since they are one of the rising stars in the current rush of Gen X and millennials cars that have been making strides of late.

Just don’t let Smokey catch up with you.