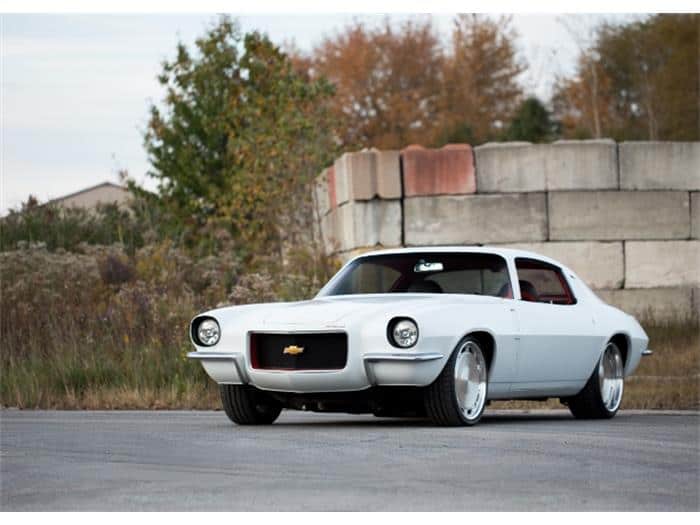 In the Golden Age of car design, many manufacturers strove for innovative futuristic designs. Some looked as though they had been inspired by a UFO, while others drew inspiration from aircraft of the time. This trend seemed to calm down over the years but never fully went away, offering resurgence with the new models coming out today.

The Pick of the Day, a 1970 Chevrolet Camaro custom known as Scramjet, is a prime example.  The car has been modified to resemble the hypersonic military aircraft that plies the edges of outer space at speeds exceeding Mach 5, from which the custom Camaro drew its name, the Scramjet.

According to the listing on ClassicCars.com, Scramjet was built by Penfound Design in Elyria, Ohio, and has won many top awards including qualifying as a Street Machine Of The Year entrant in the Goodguys PPG Nationals, First Place Street Touring in the Cleveland Autorama, Cruisin’ Times Top 40 All Star Award, Second Place in the Mild Custom Class,inclusion in the Nine Noteworthy Cars at the Detroit Autorama and an appearance at Mac’s Motor City Garage.

The builder began with an ordinary second-generation Camaro and worked in design cues from the aircraft in the form of seven air scoops on the hood, roof and fenders that close seamlessly into the body when the car is parked.

The listing also states that the Scramjet Camaro has a fabricated nose which extends forward several inches with a deep air-intake grille, and is accompanied by Corvette bumpers and tunneled headlights. The rear of the car has 1990 Corvette ZR1 tail lights that are set deep into a hand-fabricated rear panel that incorporates a central exhaust bezel, Corvette bumpers and integrated rear spoiler.

Just as the aircraft was powerful, this Camaro version is motivated by a 505-horsepower Chevrolet Performance LS7 crate engine mated to a 4L80E Turbo Hydra-Matic 6-speed transmission.

According to the listing, the Scramjet Camaro uses Art Morrison front and rear chassis sections with Ride Tech suspension and four-wheel disc brakes by SSBC.

Completing the look is a set of unique custom-made Boyd Coddington/Penfound Design wheels with Toyo Z-rated radial tires. The exterior of the Scramjet Camaro is “Mach 4 White” paint specially blended by PPG’s colorists. The clean and smooth theme extends to the custom interior, which has snappy red upholstery and a Kenwood/JVC head unit to control numerous functions, including engine start and stop, power-window controls, headlight functions, and scoop opening and closing.