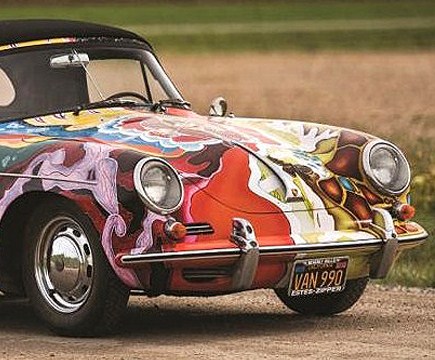 One of the most memorable cars of the psychedelic ’60s, Janis Joplin’s fantastically painted 1964 Porsche 356 SC Cabriolet, will make a guest appearance in March during the Amelia Island Concours d’Elegance in Florida.

While Joplin sang “my friends all drive Porsches,” she actually drove one, too, a convertible she bought used in 1968 for $3,500 from a Beverly Hills dealer. One of her band’s roadies, Dave Richards, created the car’s amazing mural, which he called “The History of the Universe.”

After her death in 1970, the Porsche went to her family members, who had it repainted in a more traditional hue. Later, two Denver women restored the 356 to its LSD-infused glory, faithfully copying Richards’ artwork. In 1995, the family loaned the Porsche to the Rock and Roll Hall of Fame and Museum in Cleveland, where it remained for nearly 20 years.

Like Joplin herself, the Porsche made quite a splash when it returned to the public domain with its highly publicized sale in December at RM Sotheby’s Driven by Disruption auction in New York City. The car sold for the astounding sum of $1.76 million, four times the pre-auction estimate and around 10 times that of a non-psychedelic 356 SC Cabriolet.

The Porsche will appear March 13 at the Amelia Island Concours d’Elegance in its signature paint scheme and still wearing the Estes-Zipper license-plate frame from the dealership where Joplin purchased the car. It will be part of a special concours class of Porsche 356 sports cars.

“Ironically, Joplin’s motives for buying her Porsche were very similar to Ferry Porsche’s when he created the 356,” Mark Becker, vice-chairman of the Amelia Island Concours, said in a news release. “He claimed that he simply built his dream car; she created the car of her dreams.”