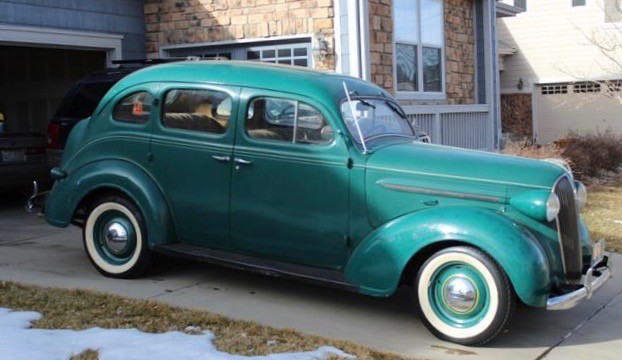 According to the Standard Catalog of American Cars, Plymouth’s Deluxe model for 1937, the P4, was longer and “fattened” when compared with the styling of the previous P2. It was built with a new stamped-steel roof, new “Safety Styling” interior — knobs moved from on the dash to beneath it and padding on the back of the front seats to better protect those sitting in the back seat — and was equipped with a new hypoid-gear differential and “airplane-type” shock absorbers.

The catalog notes that Plymouth produced so many P4s — more than half a million — that it set a production record that stood until 1951. 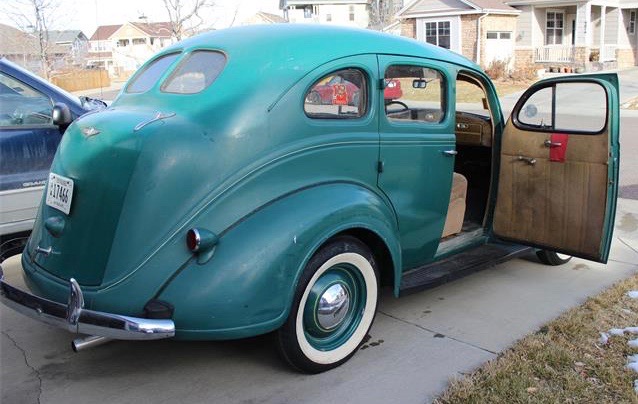 The Pick of the Day is a 1937 Plymouth P4 that the private seller says is a “running, driving and stopping survivor!”

In fact, the advertisement on ClassicCars.com notes, “I wanted to restore the car, but my conscience got the best of me because of the amazing condition of the car. They are only original once and I just couldn’t mess with it in this condition.”

The seller is asking $13,900 or best offer, in part because the car is in Denver and the seller has moved to Chicago.

While a survivor that the seller says is in “excellent condition for age,” the car does have new front brakes, water pump, thermostat, exhaust and battery.

“Paint has some small chips,” the advertisement notes, explaining “previous owner used touch up paint that didn’t quite match to try and fix the chips.”

The seller reports that the interior is “amazing and original. Only real issue is the front seat on driver’s side. To access the battery over the years it’s rubbed through.” (See photo)

The seller also notes that there is a rust spot: “(on) the lip for the trunk seal. It was cleaned and then rust stop was applied before the seal was installed. The area was about 18-20 inches long and there is lip remaining so it didn’t completely rust away.”

Included with the car are “thousands of dollars worth of NOS and exact modern replica parts are included. I have lots of literature as well, including shop manuals, parts manuals and a few other items for the car.”

If you want to see the car, the seller needs some notice, “because I currently live in Chicago and the car is in Denver, one of the reasons I’m selling it.”