Afternoon at the improv: An entertaining way to move the metal 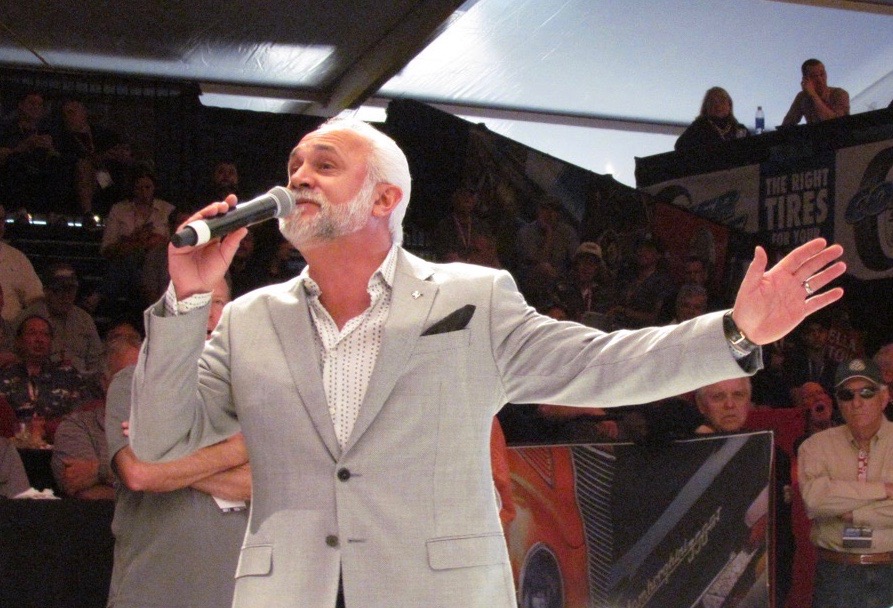 Drew Alcazar is on the block, selling another car at Russo and Steele | Larry Edsall photos

I’m exhausted, and not just because Arizona Auction Week involves as many as 10 consecutive days that start well before the sun comes up and don’t end until the time when Cinderella’s Porsche turns into a pumpkin.

No, the reason I’m exhausted right now is that I spent much of Saturday afternoon watching Drew Alcazar perform in Russo and Steele’s auction-in the-round format.

It’s auction-in-the-round at Russo and Steele

Words I wrote in my notebook while watching included “dynamo,” “Tasmanian devil,” and “Energizer bunny.”

Alcazar and his wife, Josephine, launched Russo and Steele some 16 years ago. They have homes in Arizona and Orange County, California, and stage classic and collector car auctions in both places, as well as doing one each August on the Monterey Peninsula.

A freak, tornado-like Arizona storm tried to put them out of business during their 10th anniversary Scottsdale auction. But Alcazar and his team not only cleaned up the resulting mess, but once public safety officials agreed the facilities were safe, they actually completed the auction, even though some of the cars were battered by the collapsing tent.

You probably have heard some child described as a “bundle of energy.” Well, Alcazar is not a child; in fact, he and Josephine have grandchildren. But aside from talking with a consignor here or a bidder over there, the only time I saw him stop Saturday afternoon was when he brought Josephine out onto the auction floor so they could look into a television camera together and take advantage of the auction webcast to tell Jack and Isabella, their grandchildren who live in Germany, that their grandparents love them and miss them.

Alcazar signals that ‘the reserve is off,’ which means the car will sell

Oh, and for all his animated movement, Alcazar remains impeccably dressed with neither a crease nor a hair out of place.

Each of the Arizona auctions has its own personality, its own form of energy.

Especially when it was being held in the world’s largest tent, Barrett-Jackson frequently was described as something of a three-ring circus with a classic car auction quite literally under the big top, with a midway full of vendors, and with automakers offering thrill rides out on the tarmac. The “tent” is still there and shelters vendors and cars, but the auction action and much of the automotive lifestyle exposition have graduated into a huge, permanent building at WestWorld. No more a circus; its gravity is more like a big rock concert or  theme park/destination venue.

Speaking of graduation, earlier in the day Saturday, I’d driven out to Fountain Hills and Fort McDowell, where Mitch Silver is doing his auction. Silver is a former college professor and takes a very low-key, low-pressure approach to selling cars, which fill a fenced-off parking area that could be the parking lot of a very cool college.

Meanwhile, and while distinctly different from each other, Bonhams, Gooding & Company and RM Sotheby’s each has an auction atmosphere with an almost British reserve, which seems fitting since Bonhams is a British company, and Gooding and RM Sotheby’s both have British auctioneers.

And then there’s Russo and Steele and its rathe intimate, theater-in-the-round approach, with bidders seated on risers on either side and even above the block. The format puts bidders close to the cars and to the actors… I mean the auction team, which runs its block much like an improv theater production; cars enter stage left and the players, led by Alcazar, give their very dramatic performances.

Oh, but if you think Alcazar is animated, just spend a few minutes watching bidder assistant Marty Hill. The Oklahoman is all-energy all the time.

“I wouldn’t do an auction without him,” Alcazar said, adding that Hill refuses to take so much as a break from the block as long as there’s another car waiting to be sold.