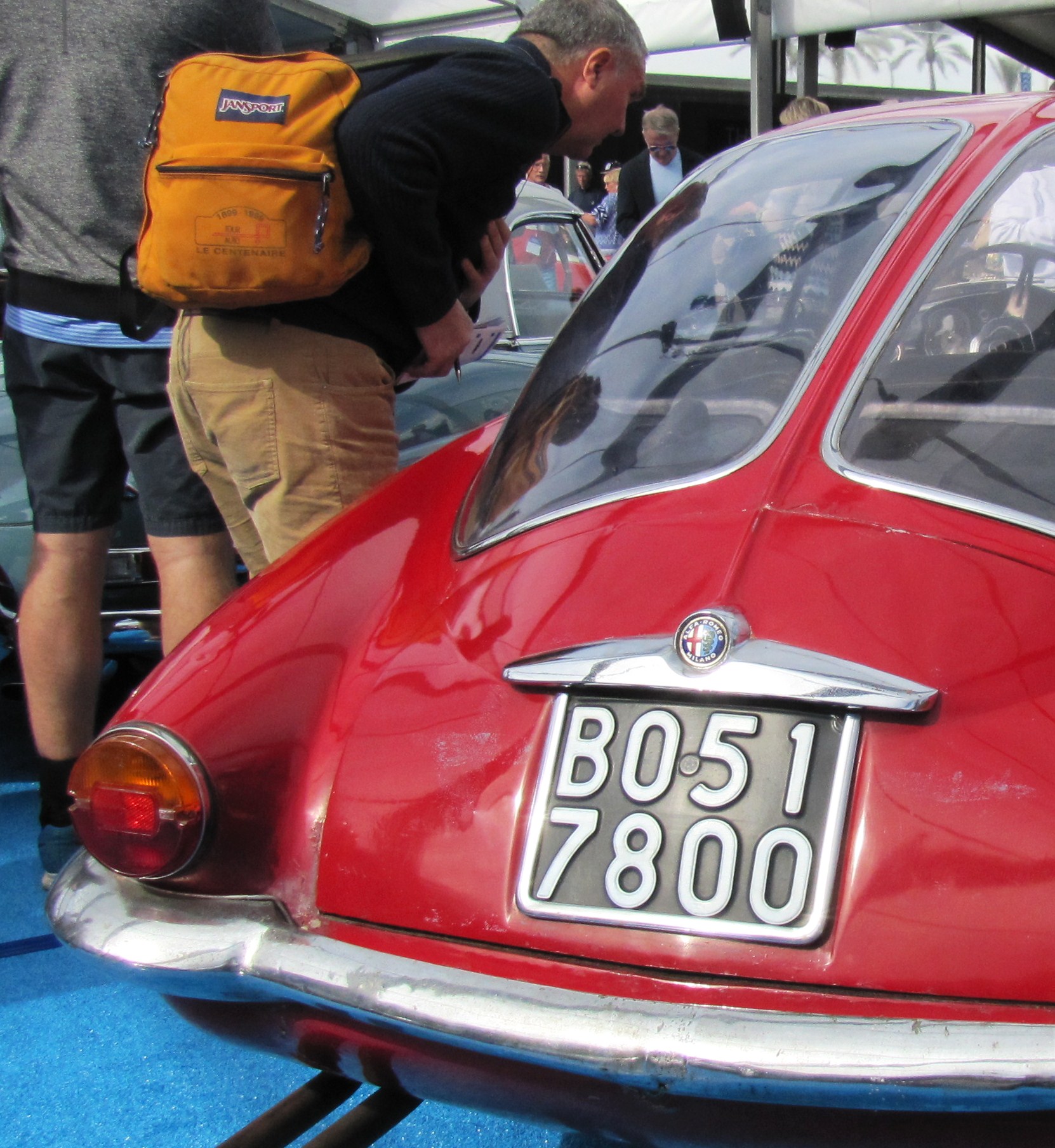 Once again, the Gooding & Company auction presented some interesting “barn find” European sports cars at its Scottsdale sale, including one of the signature cars of the event, a one-a-kind 1955 Alfa Romeo 1900C SS Coupe Speciale, in distressed yet picturesque condition.

With evocative coachwork by Buano created for display at the 1955 Turin Motor Show, the Alfa was a center of attention at Gooding, even with a cracking repaint in an incorrect red color and some rough-looking dents on top of the alloy right-front fender.

Nonetheless, the stylistic magic of its fastback split-window greenhouse and other unique design features shone through and it sold Friday for a hammer price of $900,000 (not including auction fees) after a tortuous round of incremental bidding during which prospective owners jumped in and out of the competition.

So what now? Does the famed Alfa Romeo Boano live on as a “preservation” car or is it headed to the restoration shop? The car did win a preservation-class award at Pebble Beach, but does that mean it should remain in its current state?

That’s the conundrum that owners of original but much-less-than-pristine collector cars face these days: to restore or not to restore. A restoration might bring a car back to its original condition, but it erases the patina of history and use. Some cars cry out to be preserved as they are while others are in such shoddy condition that they become more-or-less a template for the restoration shop. Sometimes, that decision can be difficult.

Donald Osborne, the well-known classic car appraiser, commentator and long-time contributor to Sports Car Market magazine, said in an interview that each car has its own story and its own set of conditions, and each needs to be studied individually to determine what it should be and how it will be used by its new owner.

The alloy-bodied Alfa has a crunched front fender

“You have cars that are true preservation cars, cars that have always been used and loved and cared for,” Osborne said. “Then there are cars that have been parked and abandoned for years, the so called barn-find cars.

“And then you have cars that are just good, honest restoration candidates. You don’t have a lot of the original finish, what the factory craftsmen made and created, that still exists. And it that case, it should be given back to its original intent. And that’s a restoration.”

The Alfa would fall into the latter category, he noted, because it’s not really in preserved condition, despite its Pebble Beach accolade.

“It’s an extraordinary car, it’s in great shape, it’s amazing that it still survives,” Osborne noted. “But it’s not a preservation car. It’s a car to be restored, and the new owner, who just paid a pretty penny for it, intends to restore it back to its original glory, in its original yellow and black paint. And that’s what it deserves. It’s not about preservation at this point.”

There’s another category of as-found collector cars, Osborne acknowledged: total beater cars that are cool enough to be driven as they are, warts and all.

The valuable Ferrari Dino is covered in crud

“As in the now famous, or infamous, case of Jerry Seinfeld’s Speedster that he bought at Gooding for a record price of $583,000,” Osborne said, referring to a beat-up Porsche 356 that Seinfeld bought for a somewhat shocking premium. That car and Seinfeld’s defense of his purchase were the subject of a recent Sports Car Market article in which the comedian said he wanted to buy the car and drive it as is.

“Reading what Seinfeld said about it, he didn’t buy it as a preservation candidate,” Osborne said. “He bought it as a rat rod. And I think that is in a completely different category of collecting.”

Four other cars “with original dirt” at Gooding each present its own unique potential for either restoration or preservation – a 1962 Maserati 3500 GTi Spider that the Gooding catalog calls an “ideal candidate for concours-quality restoration;” a very dirty 1974 Ferrari Dino 246 GTS driven just over 30,000 miles, then left to sit and rot; and a crusty pair of “his and her” Mercedes-Benz roadsters, a 1957 300 SL with factory hardtop and a 1960 190 SL.

Patrick Bryson, a dedicated Phoenix car guy who heads the Ramshorn Rally for classic Porsches in Montana, was looking over the Maserati convertible as a possible preservation car, with some reservations.

“When you look at this car, you could clean it up and polish it,” Bryson observed. “I’d wash it and have it buffed out.”

Mechanically, the car would have to be refurbished, he noted, and the tires are long past usable. The exhaust has holes in it, he said after peering underneath, although the mufflers look intact. As for the interior, the dashboard and leather seats don’t look too bad. But then he cast eyes on the replacement carpeting.

“It has household shag carpeting,” he said with a wince. “You’d have to change the carpets right away.”

In Osborne’s view, only the Mercedes 190 SL – the least-valuable of the five cars – would be a worthy candidate for preservation.

“The 190, quite interestingly, is or could indeed be a preservation car,” Osborne said. “It has California blue plates that show it was on the road and registered not that long ago. The sills are all nice and straight, the panel fit is really quite excellent, and the paint stills has a good shine to it.

Though neglected, the Mercedes-Benz 190 SL seems in good condition

“That’s something that you could preserve. You could clean it up, get it running, and run as it is. And keep its heritage. You stay true to what the car was born being.”

Keeping a great car intact is a goal that more owners are pursuing these days, he added, both because of the high costs of quality restoration and the fact that a car loses some of its identity, and sometimes its drivability, once it has been restored.

“Obviously, everybody would love not having to take a car completely apart and put it back together,” Osborne said. “No matter how careful the craftsmen are in a restoration shop, they can’t build them the way the original factory built them.

“The highest point of a car you could possibly have is what the Italians call it conservato. It’s a car that has always been cared for, always been in use.”

The two Mercedes were sold Friday, the 300 SL for $720,000 and the 190 SL for $67,500, both plus auction fees. The 300 SL roadsters and gullwing coupes that have shot up in value during recent years seem to have hit a plateau, and the relatively modest result for the dingy roadster seems to reflect that.

Of course, with either of those cars, you’d have to add the cost of restoration, or at least whatever it takes to get it back on the road.

The 300 SL on the block at Gooding