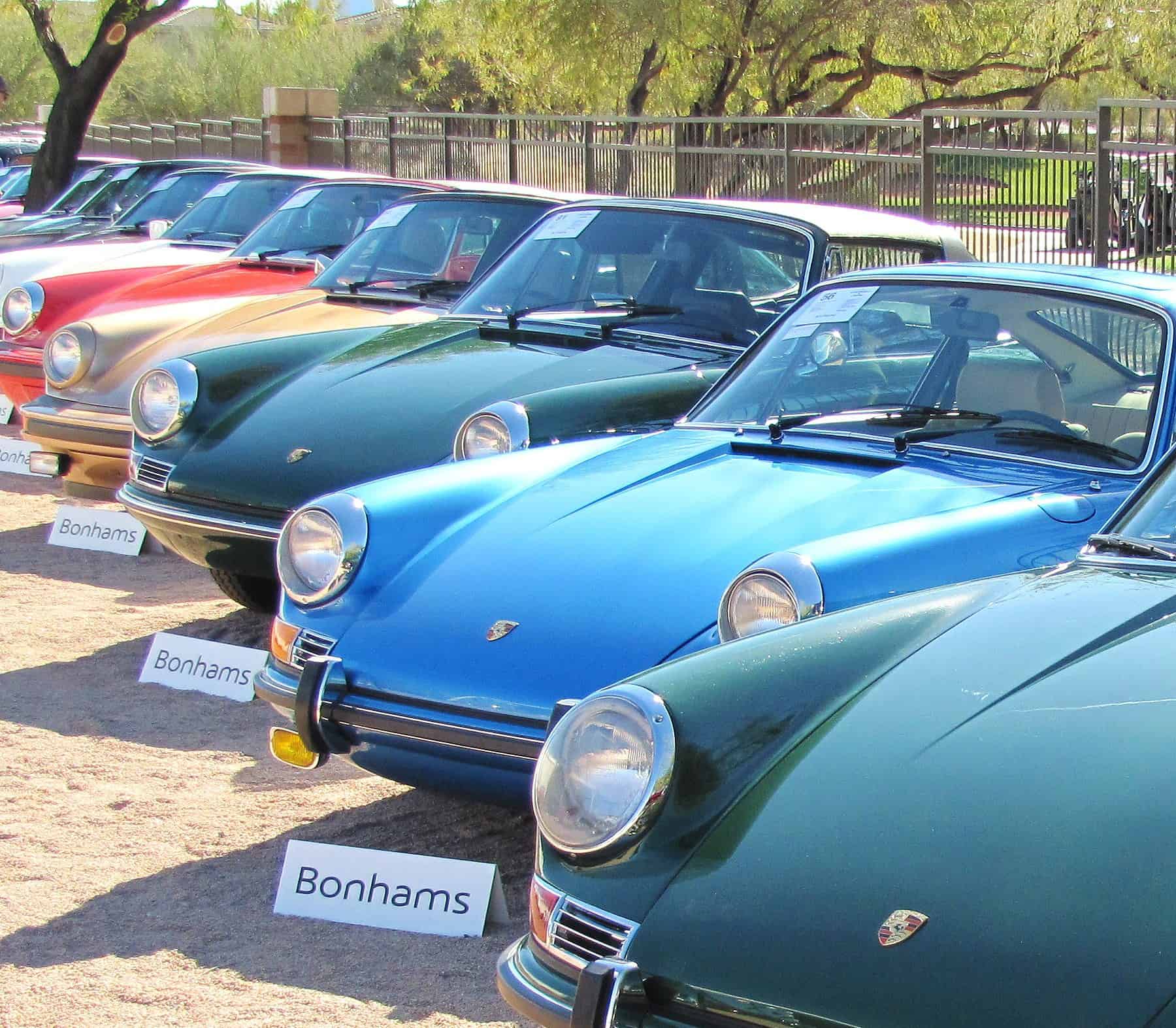 The Porsche 911 seems to have it all – evocative styling, sparkling performance, competition history, a remarkably long-lived heritage – and there are plenty of them to go around. Since they hit the ground running in 1963, 911s have occupied a special space in the hearts of millions of enthusiasts of every stripe.

Porsches seem to be everywhere at the Arizona auctions this week, especially the 911 and its variants that have seen such a run up in values in the past few years. Bonhams has 21 Porsches out of its total of 115 collector cars being offered at auction today in Scottsdale. Sixteen of those cars are 911s, most of them lined up in a row that repeats the iconic form like an arcade mirror.

Barrett-Jackson’s vast docket includes 11 of the 911s, by my count. Gooding & Company boasts 13 911s among its 19 Porsches, RM Sotheby’s has eight 911s in its Porsche collection, while Silver includes four of them.

Meanwhile, at Russo and Steele, the Scottsdale auction company that calls its sale “The epicenter of the collector car universe!” Porsches take 40 lot numbers on the docket, and 23 are 911s.

As noted Porsche collector Jerry Seinfeld might say, “So what’s up with all the Porsche 911s?”

According to Dave Kinney, collector car appraiser, auction expert and publisher of the Hagerty Price Guide, as 911 values have soared, so has the pressure on current owners to sell them off before the fervor dies down and prices stop rocketing skyward. The Arizona auction hoard is a reflection of the strength of the current market, he says.

“The increase in price has increased the visibility of them,” Kinney said. “A lot of people who thought of them as a car that was worth X are willing to sell them because it is now worth X plus Y. That brings out a lot of cars.”

There are also plenty of Porsche people who are kicking themselves for not buying that nice 911 a few years ago before prices soared. I’m one of those, having passed on a sweet 911 cabriolet now worth about four times what I would have paid for it in 2012.

Porsche 911 values have been on a solid upswing | Larry Edsall

I trace the beginning of the boom in 911s to the sale of a single car in 2011. That car was the 1970 Porsche 911S that was driven by Steve McQueen in the opening sequences of the landmark motorsports film Le Mans, and was owned by the actor for a number of years. Mecum sold it at auction for the then-unfathomable price of $1.375 million, about 10 times the going rate for a non-celebrity 911S.

But as well as selling for crazy money, the Le Mans car riveted the car world’s attention on 911s. Millions of people keyed up YouTube to watch the scenic beginning of the movie with the car lovingly filmed rolling through the French countryside, McQueen at the wheel. I still recall watching Le Mans for the first time, and saying to myself, “What a great car.”

Another factor was Porsche’s highly successful celebration of the 50th anniversary of the 911 a couple years later, further raising the car’s profile and admiration.

Kinney noted that Porsches have been getting pricier along with most of the collector car market, especially European sports cars, what he calls “the pressure from everything else.”

Bonhams also has an impressive  selection of 356 models | Bob Golfen

“You look at other cars that are not as interesting or as important as 911s (also) have gone up in value,” he said.

But 911s bring together a number of factors that add to their value at this particular time.

“It’s the age of the buyer,” Kinney said. “A lot of people in their 40s and early 50s are interested in 911s because they grew up with them and have been around them or they were an object of desire when they were younger.

“They speak across a couple of different generations,” he added. “If you are old enough, you can remember when the car was introduced in the early ’60s.”

They are also a lot of nice 911s that come to market, he added. “People who own them tend to take good care of them. So they tend to last.”

There is a downside to all this love and attention, which can be seen in the number of competing Porsches coming to auction this week, including some of the earlier and also increasingly valuable 356 models.

“Unfortunately, the market can get oversaturated if you have too many cars, and that’s one of the problems that we’re looking at with all the 911s and 911 variants on sale here this week,” Kinney said.

Seinfeld will add some of his spectacular collection to the mix in March when 18 of his Porsches go to auction at Gooding’s sale on Amelia Island, Florida. Those cars, most of them rare special models, are expected to sell at a premium because of their intrinsic value as well as celebrity connection. That could have an overall effect on prices in the future.

The Bonhams sale today represents the most potentially interesting outcome for auction watchers, Kinney said, because all of the Porsches at the auction are being offered at no reserve, which means that the market will determine their value without the sellers’ preconceptions.

“So I’m look forward to watching that and seeing what these cars bring at Bonhams,” he said. “Any time you have a no-reserve sale, there’s no second guessing what the seller’s thoughts are. It’s going to sell. It’s a snapshot of time of what people perceive the value at that particular venue.”

Although, Kinney added, “It’s a pretty dangerous thing to have all that many cars sell at the same time because you are counting on maybe a hundred people looking for what, 20 different cars. It’s going to be a very interesting sale.”