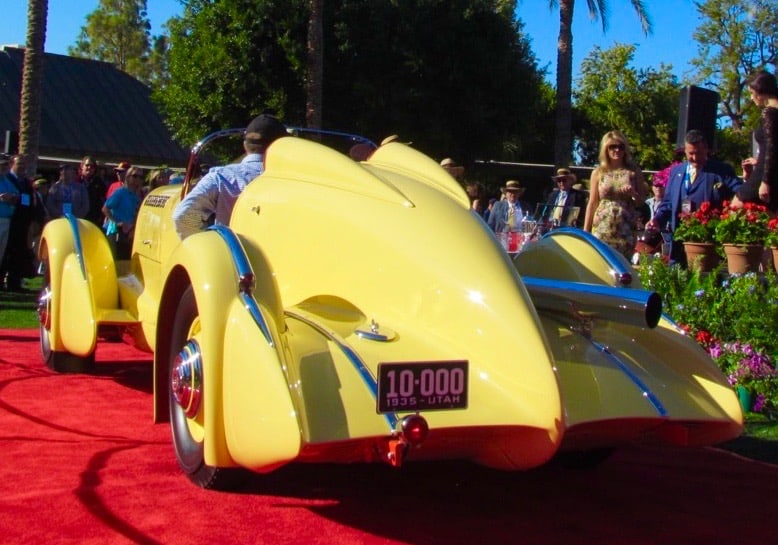 One of America’s most famous and historic cars, the 1935 Duesenberg SJ Special known as the “Mormon Meteor,” added another accolade Sunday when judges selected the huge but streamlined and bright yellow vehicle as the best of show at the third annual Arizona Concours d’Elegance.

After selecting 16 best of class winners, the judges narrowed the best of show finalists to four cars before calling the Duesenberg across the red-carpeted awards ramp in the courtyard of the Arizona Biltmore Resort. The other finalists were a 1931 Chrysler Imperial CG LeBaron dual-cowl phaeton, a 1932 Rolls-Royce Phantom II Continental Pillarless Berline bodied by Figoni et Falaschi and originally owned by the Prince of Nepal, and a Ferrari 250 GT, one of only five such cars with bodywork by Zagato.

In 1935, Ab Jenkins, who had pioneered speed racing on the Bonneville Salt Flats, set a 24-hour speed record in the Duesenberg Special in the Utah desert as part of an event in which Donald Campbell set a one-mile world land speed record in his Bluebird and G.E.T. Eyston drove his Speed of the Wind to eclipse Jenkins’ short-lived record.

Jenkins was back the following year, now with Augie Duesenberg working with Lycoming to build a Curtiss Conquerer V12 engine for the essentially stock Duesenberg chassis. Jenkins dubbed it the Mormon Meteor and, with help from relief driver Babe Stapp, averaged a record 153.823 miles per hour for 24 hours and 148.641 over 48 hours in the Meteor.

Powered again by its standard Duesenberg supercharged J557 engine, Jenkins bought the car from Duesenberg for $4,800 and modified it for driving on public roads. He added doors, a top, re-routed the exhaust pipe and removed some of the special aerodynamic components designed for the speed runs. He even hung campaign signs on the car when he ran for mayor of Salt Lake City (he won election in 1939, reportedly without having to make even a single campaign speech). His son, Marvin, later drove the Meteor back and forth to college.

After spending 45 years with a family in Alabama and doing numerous vintage vehicle rallies, the car sold for more than $4 million at the Gooding & Company auction at Pebble Beach in 2004. Very soon thereafter, Harry Yeaggy of Cincinnati acquired the car from the auction buyer and restored it to the visual configuration in which Jenkins had set his records at Bonneville.

The car made its post-restoration debut in 2007 at the Pebble Beach Concours d’Elegance, where it was awarded best of show. According to John Carefoot, curator of Yeaggy’s exceptional 25-car collection, the Duesenberg subsequently has won best of show honors at Amelia Island, the Glenmoor Gathering, the Auburn-Cord-Duesenberg Festival, the Concours d’Elegance of America in Michigan and now in Phoenix.

As the 2016 Arizona Concours ended, it was announced that the fourth-annual event is scheduled for January 15, 2017 with featured classes for classic Lincolns, cars by Ettore and Jean Bugatti and cars with Vignale coachwork.