Painting under fire: An evening with Masha 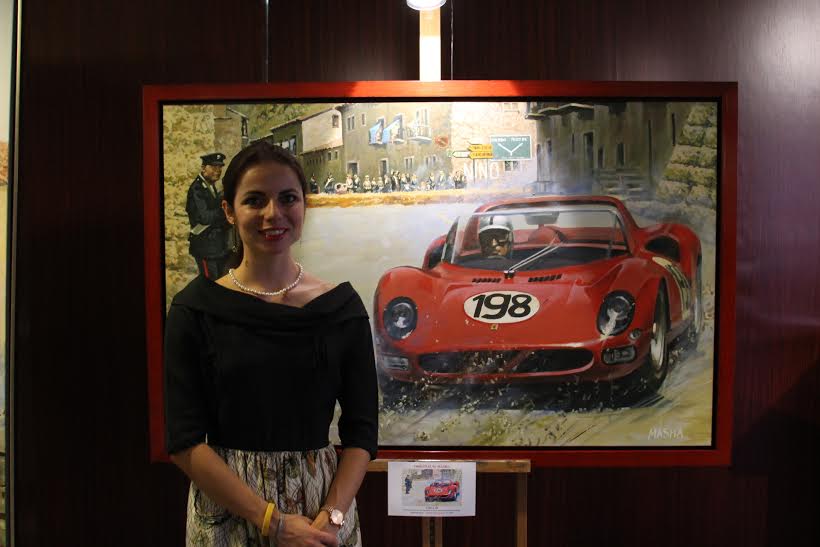 As I walked up the steps inside of the Penske Racing Museum in Scottsdale,  I could see the Arizona sky was lit with bright oranges, yellows, red, and purple. It seemed as though the sky was on fire. What a wonderful way to kick off Arizona Auction week, I thought.

As they arrived, other visitors also marveled at the colors, but not just those in the sunset, because being honored this Friday evening were two special people, Masha, an artist from the Ukraine, and long-time racing driver Brian Redman.

Masha arrived in the United States the day that fighting broke out between Russia and her  Ukrainian homeland. She was able to stay in the U.S. and took up painting as a means to survive.

“I have been painting my whole life,” she told Classic Car News, “literally since I could hold a paintbrush.”

Masha also studied for six years at the National Art Academy in Ukraine.

The room at the Penske museum was filled with historic trophies, model race cars,  and provided an overview of the  historic race cars of the museum on the level below. The room also opened to a view of the surrounding Penske auto dealerships, among them Ferrari, Bentley, Jaguar, and Lamborghini, just to name a few.

Masha’s paintings reflect her love of sports, including cycling.

“I love painting cyclists,” she said, “it was my passion before I got into cars.”

But most of her paintings here reflected moments in racing history featuring drivers such as Redman, Stirling Moss, Lewis Hamilton, and Nico Roseberg.

“I am really excited about the passion behind driving and risking it all for the race,” she said..

She talked about how she had begun painting cars and drivers as just as sketch for a friend. The friend knew Steve Austin, a motorsports art dealer who also organizes auto tours to European vintage racing events.

“He liked my work,” she said of Austin, who now represents her and who  hosted the event Friday.

“I always fall in love with whats new. I get excited about them (the paintings), but will always love my first,” she said, indicating the first painting Austin commissioned her to do.

In addition to her automotive  art, Masha has done a work she calls, Painting Under Fire. She told Classic Car News that after coming to the United States she was able to communicate with friends in Ukraine, but that it was a bittersweet experience because they had nothing left, “no money, no jobs or art buyers. No funding… Incredibly talented people who couldn’t even afford a basic canvas and paints.”

Masha says she knew she wanted to do something to help, so about a year ago she had the idea to bring some of her fellow artists from Ukraine to the U.S. to exhibit their work, to meet other artists and to regain their passion for art.

She not only worked to raise awareness of her artists friends and their work, but also was busy raising funds so they could travel. She said they will arrive in March and already have an exhibit scheduled in New York City.