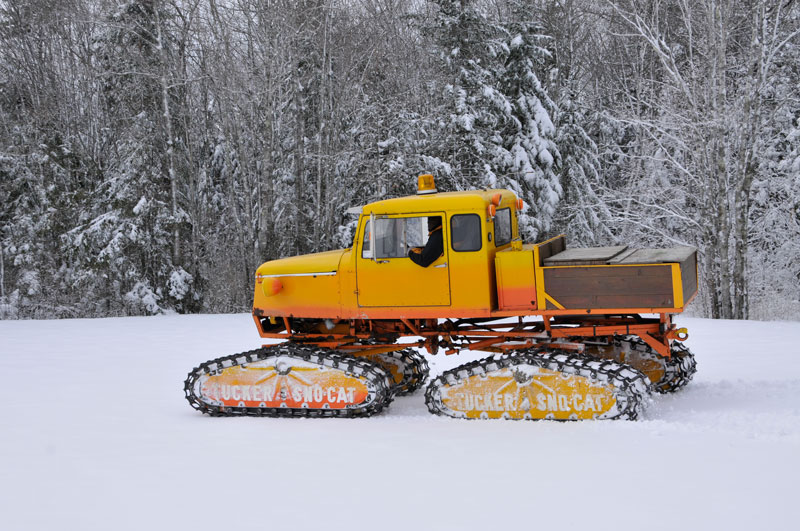 The Simeone Foundation Automotive Museum in Philadelphia is scheduled to stage its first Demo Day of the year Saturday with several cars being exercised in a museum parking lot. However, the event is dependent on the weather and the threatening winter storm.

On the other hand, the Owls Head Transportation Museum in Owls Head, Maine, celebrates winter and the snowmobile Saturday with a special exhibition and show. The museum then kicks off the Winter Education Series on January 30 with a presentation by author-curator Charles Jacobs entitled “The Zeppelin Hindenburg.” Following presentations in the series are February 27, with  former Group 44 driver, John “Mac” McComb presenting “the Greatest Race Car Driver You’ve Never Heard Of;” March 26, with David Percival, sidecar motorcycle racer and owner of DP Motorsport,  presenting “Sidecar Racing;” and  April 30, with writer and museum professional Mark Wilkins presenting “The Lafayette Escadrille.”

Demonstrating snowmobiles at the event

The America on Wheels museum in Allentown, Pennsylvania, celebrates its Polar Express Pajama Party from 1 to 3 p.m. Sunday.

Snow machines on display are of all shapes, sizes, and brands

“Museum in Motion” tours by the National Corvette Museum in Bowling Green, Kentucky, begin January 27 to February 1 when participants visit the Daytona International Speedway.  Other tours include a visit to Tucson, Arizona, on March 7-12; the Tail of the Dragon tour May 1-4; and the Marble and Glass tour through New England from May 19-22.

Additionally, the museum is holding a Star Wars kids camp on February 15 and the museum is showcasing 14 different hot rods and street rods from 1932-1973 as part of their American Muscle exhibit, which runs through March 25.

The museum’s sinkhole in an episode of a new tv seres, The Strange Truth, on the National Geographic channel. The episode will be this Sunday, January 24 at 8pm CT.

The NCM Motorsports Park has a Michelin TrackX day on February 27. The day is autocross style, although there are no classes and the runs are not timed. Later, NASA Great Lakes region will hold an open test day at the track on March 18, followed by a full NASA weekend March 19-20.