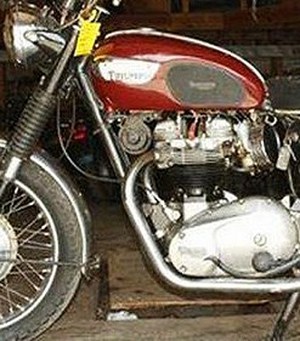 One of the best things about vintage motorcycles is that you get a lot more collectible vehicle for your money that you do with cars. After spending almost a week at the Las Vegas motorcycle auctions, I still have motorcycles on my mind. As a result, the Pick of the Day is a vintage motorcycle, but not just any vintage bike: the legendary Triumph Bonneville.

The Bonneville was introduced in 1959 and named for the famous land-speed-record site where Triumph had set numerous records. The first versions of the British bike were an immediate hit with motorcycling enthusiasts and quickly became the King of the Hill among the cafe racer set both in England and the U.S.

The original version of the bike was not without its flaws, and running changes made it better with each year.  By the time they built the Pick of the Day, a 1967 Triumph Bonneville listed on ClassicCars.com by a dealer in Effingham Illinois, Triumph had ironed out the bugs and created what was probably the best motorcycle of the time.

The engineers mated the engine and gearbox into a single unit and improved the frame and the suspension to create a motorcycle that was easily capable of speeds in excess of 100 mph while also handling well. This was the golden era of the Bonneville, and experts all agree that the 67-69 models were the best of the best.

This example is not completely original, having an incorrect paint job, but according to the seller, the engine is freshly rebuilt, which adds to its plusses.

It looks like a very clean bike and a Bonneville from this era will always be a desirable collector bike, and easily worth the asking price of $6,495.

I can think of few better first-time classic bikes than the Bonneville, which has strong support as far as maintenance goes, and parts supply that is the strongest of any vintage motorcycle. The Bonneville, like the Jaguar E-type, also has a mythology that will live on and continue to be significant for generations to come.