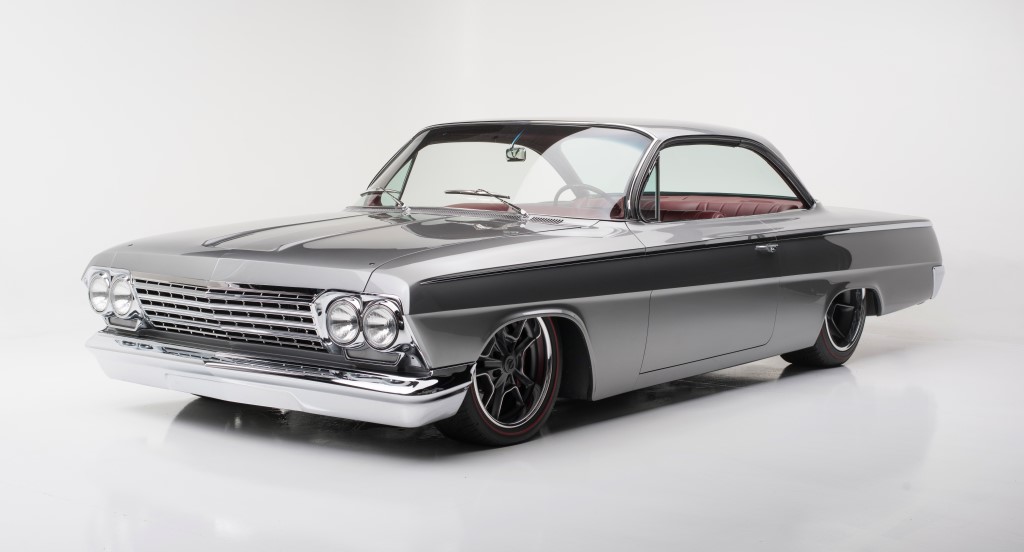 Editor’s note: This is the 28th in a 30-day sponsored series featuring cars to be sold January 23-31 during Barrett-Jackson’s 45th Scottsdale auction.

The 2015 Barrett-Jackson Cup competition last August was an event Andy Leach, owner of Cal Auto Creations, won’t soon forget. “My wife tapped me on the arm and said, ‘We won,’ he remembers. “For a moment time stood still … it was like a dream in slow motion.” Leach built the sleek and eternally tasteful 1962 Chevrolet Bel Air Custom Bubble Top that took top honors at this best-of-the-best custom car competition and is now headed to Barrett-Jackson’s Scottsdale auction block.

To win the coveted Barrett-Jackson Cup – and $30,000 in cash – this Bubble Top rose above 24 top-notch competitors. The tough competition was judged by a trio with an intimate knowledge of custom car design and construction: Pete Chapouris, Bob Millard and Bobby Alloway, who painstakingly chipped away at each car’s strengths – and weaknesses. To impress these guys, a car must excel in every way.

Starting with the bare shell of a 1962 Chevy, Leach says the car’s owner didn’t want to get too radical and lose the Bubble Top’s charm. “We put the body on our frame table, put the Art Morrison chassis under it and built the car around the tire sizes,” he said. Wilcox was adamant that he wanted the end result to be “timeless.” That’s a tall order, but Leach has a solid background – including some time at the shop of world-renowned car builder Troy Trepanier’s Rad Rides by Troy, where subtlety and taste underpin every creation.

“To me, timelessness is about restraint, good taste and working with the vehicle rather than against it,” said Leach. “Earth-tone colors never go out of style, and elegance and taste are things people always appreciate. You just don’t mess with a bubble top, but with that said, we did move some things around in a real subtle way. But the goal was to build a car that would still look fresh 10 years from now.”

With a shop equipped with power hammers, lathes, a 5-axis CNC mill and a Solid Works 3D modeling computer program, Cal Auto Creations was able to recreate many of the thin, inexpensive mass-produced trim and interior parts using high-quality machined aluminum replacements. All body fit lines and seams were also corrected and aligned in ways that were simply not possible in a mass-production setting. The grille was reworked at a sharper angle, the front and rear bumpers were completely hand-built, and the front fenders and hood were lengthened to fit the new grille and headlight bezel arrangement.

The drivetrain is another area where timeless build choices abound. Instead of a “4-speed, dual-quad, posi-traction 409” or brutish, fire-belching 454 big block, there’s a 638hp GM supercharged LS9 thrumming away inside the sanitary titanium-hued engine bay. It’s the same engine installed in modern ZR1 Corvettes, and a marvel of insane horsepower cloaked in a dinner jacket. It’s backed by a Bowler Performance 6-speed manual transmission – complete with double-overdrive for the ultimate in highway cruise efficiency. It all rolls on masterfully highlighted Billet Specialties 5-spoke rims and Diamond Back red line tires.