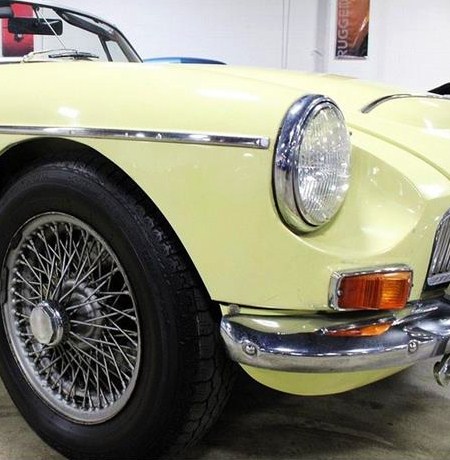 The 1968 MGC roadster is presented in good original condition with less than 50,000 miles

Mourning the loss after 1967 of the popular but dated Austin-Healey 3000, the British Motor Company attempted to fill the gap by adding a new model to the MG lineup, a six-cylinder version of the MGB that was dubbed the MGC. More of a long-legged GT than the sprightly four-cylinder sports car, the MGC was produced for just two model years after a tepid reception by the press and buying public.

The Pick of the Day is a 1968 MGC roadster in original low-mileage condition offered on ClassicCars.com by a collector car dealer in Grand Rapids, Michigan. Distinguishable from the MGB by its chrome-trimmed hood bulge, needed to accommodate the longer engine, this MGC looks to be an interesting survivor of a rare model that the seller says has no body damage or corrosion.

“With 145 horsepower and plenty of torque on tap, the MGC was the most powerful car MG produced during the era,” the seller notes. “Road tests revealed a MG that was quicker in acceleration and a car that offered a much higher top speed, exceeding 120 mph.”

The six-cylinder model compared well with the 95-horsepower MGB in performance, but contemporary road tests revealed that the changes made to the front suspension and the extra weight in the nose had dulled the responsive handling of the four-cylinder roadster. Still, the MGC is a great highway car with a smooth-running and a more-relaxed demeanor for cross-country driving.

In recent years, the MGC has received greater appreciation despite its cornering woes, with its rarity and added power and finesse putting it well ahead of the MGB in value. The roadster version carries more value than the attractive MGC hatchback coupe that also received the six-cylinder treatment in limited numbers.

This MGC retains its original 3-liter engine and apparently original paint and interior, the dealer says, and the rest of the car is also well preserved. The odometer shows fewer than 50,000 miles.

The MGC’s interior looks to be in well-preserved condition

“The paint is a bit aged but in good driver condition and certainly not sore on the eyes,” the seller adds. “The interior is in even better condition with good-looking black seating with white piping around the edges, the dash is very original-looking and in great shape, the carpet is in good shape; the vehicle is very comfortable from both sides of the cockpit.”

A major demerit, however, is its Borg Warner automatic transmission, a rare option that works well enough but further tarnishes the MGC’s sporting aura. The four-speed models with electric overdrive are much preferred. It would be possible to convert this car to stick shift, which might be worthwhile considering the car’s rarity.

The roadster is priced at a reasonable $22,900, which could provide enough wiggle room for the cost of a manual-transmission transplant.