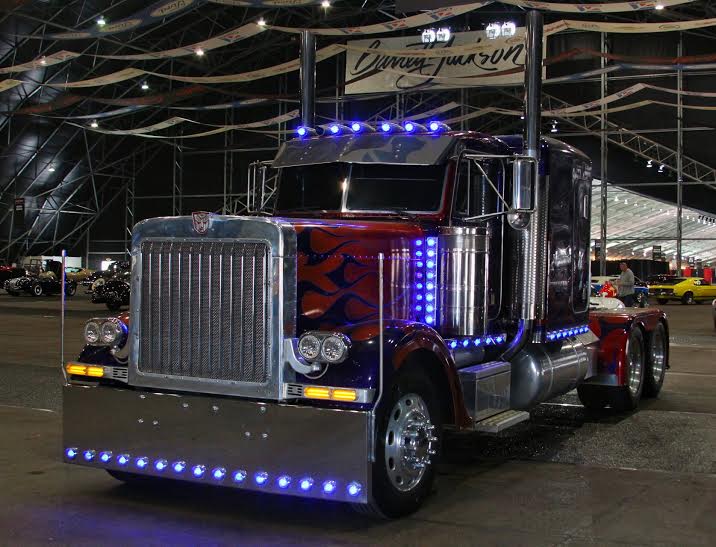 Transformers arriving at WestWorld of Scottsdale | Photography by Matthew Fink

Two of the most iconic characters from the Transformers movie franchise will cross the block at Barrett-Jacksons 45th Scottsdale auction, taking place January 23-31 at WestWorld of Scottsdale. Paramount Pictures is auctioning Optimus Prime, the iconic truck featured in the first three movies of the franchise, while Michael Bay, the films’ director, is auctioning his 1967 Chevrolet Camaro SS which was used as Bumblebee in the latest installment, Transformers: Age of Extinction.

Monday, Barrett-Jackson invited media to see the Autobots as they were  delivered to WestWorld and Classic Car News had a chance to get up close and personal with the vehicles.

“We’re excited that Paramount Pictures and Michael Bay have chosen us to sell Optimus Prime and Bumblebee,” said Craig Jackson, chairman and chief executive of Barrett-Jackson, “two of the leading heroes from the Transformers movie franchise. Our Scottsdale auction is always electric and will serve as the ideal venue for these two celebrities seeking new homes.”

When viewing Optimus Prime, it has a real presence. It’s massive, much like  the movie character that it represent,s and its shiny and oversized exhaust stacks produce a distinctive rumble and make it one of the largest vehicles to cross the Barrett-Jackson block. Unfortunately, the truck doesn’t really transform into a two-story synthetic military leader from Cybertron, but it is a fully functional vehicle with a real VIN and title, which is in Paramount Pictures’ name.

Optimus Prime has some interesting features. Due to its stunt vehicle heritage, the truck contains massive water tanks in the cab area which shoot water around the rear wheels of the truck at the drivers command to enable the truck to do a full 180 degree turn. Additionally, the truck features a mirror-finished custom aluminum bumper with matching aluminum wheels, tanks and storage boxes.

To assist in the illusion that the Optimus Prime drives himself in the movie, this stunt truck features dark tinted windows which add to its ominous vibe in addition to rows of glowing lights.

Two water tanks are fitted into  what normally would be the truck’s sleeping compartment. They feed sprayers just ahead of the rear tires so the driver can flip a switch, hit the brakes and pull a 180-degree maneuver.

Optimus Prime was developed by a team of artists and illustrators that worked to evolve the right look and feel for each Transformer character. When the film’s production designer showed Bay a photo of the enormous tractor trailer, the director was immediately taken by the lines and size of the truck.

Already featured in the Countdown to Barrett-Jackson series, the 1967 Chevrolet Camaro SS known as Bumblebee was also on hand today.

Unlike Optimus Prime, which starred in the first three movies, this version of the Bumblebee character was only in Transformers 4: Age of Extinction.

The most notable scene involving the car featured Mark Wahlberg’s character, Cade Yaeger, talking to Bumblebee and the car responds by performing burnouts indoors. The scene is filmed at the GM Tech Center “Design Dome” in Warren, Michigan.

After its movie debut, this 1967 Camaro became part of Bay’s personal car collection.

The Camaro is a fully functional car and has been retrofitted with a modern, fuel-injected V8 engine with an overdrive manual transmission. The suspension has been upgraded and heavy-duty, four-wheel disc brakes have been added, as has a special rear brake to enable 180-degree turns.

Even during such maneuvers, drivers and passengers will be comfortable with modern air conditioning, a modern stereo and late-model leather seating.

Some features that make Bumblebee recognizable are the one-off carbon-fiber flares that cover extra-wide Nitto tires wrapped around custom three-piece wheels. The flares are complemented by a carbon-fiber front “splitter” that juts out from below the front of the car. Lurking behind original-style “hideaway” headlight doors are custom LED Halo headlights that emit an ominous yellow glow when activated.

Hints of yellow can be seen throughout the car and under the hood with custom carbon-fiber and yellow engine covers and billet aluminum core support bars.