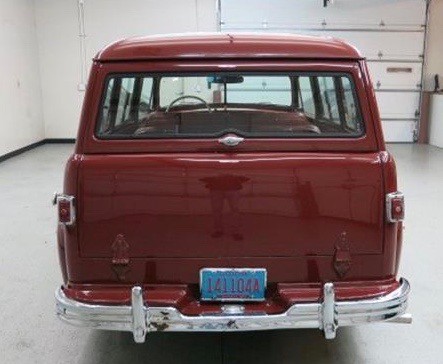 The Suburban is best-known as Chevrolet’s full-size sport utility vehicle. However, the Suburban nomenclature has been used by various automakers on haulers based on car or truck underpinnings. In Plymouth’s case, as early as the 1936 model year there was a Suburban verison in the company’s “commercial sedan” lineup.

Advertised for sale on ClassicCars.com is this 1949 Plymouth Suburban station wagon, a “well taken care of” two-door wagon which the seller, a classic car dealership in Sioux Falls, South Dakota, says has only 44,000 miles on its odometer and comes with a set of nostalgic travel stickers on the windows above its rear quarter panels.

According to The Standard Catalog of American Cars, Plymouth’s Suburban wagon was based on the company’s new post-war Deluxe chassis (P-17), which had a 111-inch wheelbase. Propulsion was via a 217cid inline six with 97 horsepower, thanks to a new intake manifold and cylinder head design that raised compression to 7.0:1, as well as a fuel pump of larger capacity.

The seller notes that the engine also was equipped with a larger starter motor, resistor spark plugs and weather-proofed ignition system for better cold or wet weather operation.

The seller of this Suburban, which is presented in high-gloss Mexican Red paint, says it is equipped with heater/defroster, rear fender skirts, AM factory radio, dual bench seating, and with factory wheel covers and “newer” whitewall tires.

The seller notes “minimum patina” on the body with “nice chrome and bright work with good fit and trim.”

The interior, the ad notes, has folding seats that provide “plenty of utility use” while also accommodating people. The ad also notes that one of the features of the Suburban was the mounting of the spare tire under the rear floor instead of inside the cabin.

This Suburban, it reports, is “a truly fine example all freshened and gone through… ready for its’ next road trip.”

To view this car on ClassicCars.com, see Pick of the Day.