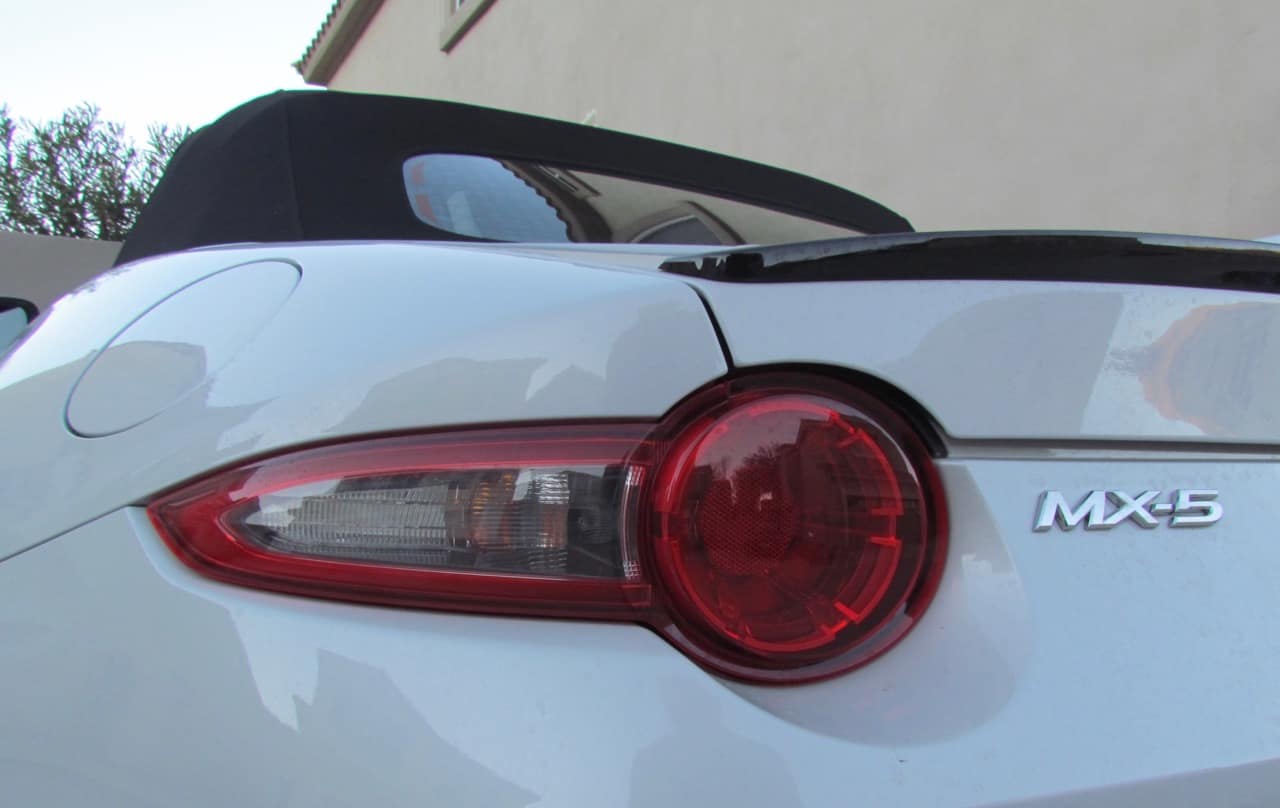 There’s a secret that some automakers — and a lot of buff-book automotive writers — don’t want you to know: Horsepower is overrated.

Oh, it’s not that the automakers are cheating when they report on the output of their engines, it’s just that you don’t need 500 horsepower, or even 400 or even 300, for your car to be fun to drive. In fact, a mere 155 horsepower is plenty sufficient if your car is small and light and nimble. For example, if your car is the new 2016 Mazda MX-5 (aka Miata).

Car looks great even with the top up

With one exception – the first Miata with an automatic transmission, provided as a concession to drivers who spent much of their time in clogged commuter traffic – Mazda’s interpretation of the classic British roadster has been the very definition of fun-to-drive right from its launch more than a quarter-century ago. It’s been light and low and tossable, as well as sure-footed and reliable, but unlike those ancient two-seaters from the British Isles, it doesn’t leak and its electrical components all seem to work just fine.

For the 2016 model year, Mazda has launched the next generation of its roadster, and it is smaller, lighter, quicker and even more nimble than its predecessor. Mazda also claims the car is 25 percent more fuel efficient than the 2015 model, with the EPA rating it at 27 city, 34 highway and 30 overall. We’ve just spent a week in the Grand Touring version of the car, drove it on some of the country’s most scenic byways, and somehow averaged 40.2 miles per gallon overall without trying to be easy on the far-right pedal.

No, the MX-5 is not a rocket ship. You’re not going to win the Stoplight Grand Prix against that overpowered muscle car in the next lane. But get out on the hilly twisties and put the top down, and you’re going to have about as much fun as you can on four wheels.

I drove the car from Phoenix up to Las Vegas and back for the recent vintage motorcycle auctions, and while I was there took time to do a lap along the amazing Northshore Drive in the Lake Mead National Recreation Area as well as through the adjacent Valley of Fire State Park.

Top down on a great road, dexterity trumps speed

The speed limit on Northshore Drive is 50 mph, and it’s only 35 in the Valley of Fire, and, yes, I was on both roads early on a weekday morning in January and pretty much had the pavement to myself. But you really don’t want to hurry through such spectacular scenery, and even though you know the Miata could negotiate either route at a faster rate, even 50 mph is fast enough to let you feel how much fun this car is to drive.

That’s one thing I’ve always loved about the MX-5, that you can drive it at 8/10s — or even faster — without getting in trouble with either the laws of physics or those enforced by the highway patrol.

And if you really need to experience more speed, you can jump on one of the western Interstates — I was on both I-40 and I-15 — with their 75 mph legal limit, and the MX-5 is happy to oblige whatever pressure you apply with your right foot.

Cockpit is snug, to put it mildly

Also standard are an easy-up (or down) manual convertible top with a built-in hard tonneau, LED head and tail lamps, leather seats with contrast-colored stitching (and they’re heated for those chilly days with the top down), plus Bluetooth, 9-speaker Bose audio, 7-inch touchscreen with navigation and air conditioning (for days when it’s too hot to put the top down).

Plus blind-spot rearview mirrors, rear cross-traffic alert (though no rearview camera), lane-departure warning (that you can turn off), as well as vehicle stability control and more.

Our test car also had an optional rear spoiler and “advanced” keyless entry system. Add in delivery charges and the as-tested price was still just $31,365.

So that’s what the 2016 MX-5 has. What does it lack? Well, frankly, there’s not a lot of room inside the cockpit, and the trunk space is anything but generous. On the other hand, Mazda is very generous: Since 2013, Mazda has been engaged in a Drive for Good campaign; test-drive any new Mazda and the automaker donates $25 and service hours to your favorite charity — so far $7.5 million and 120,000 hours have been donated.

Such a deal: I get the fun of driving the car and Shriners Hospital gets $25.