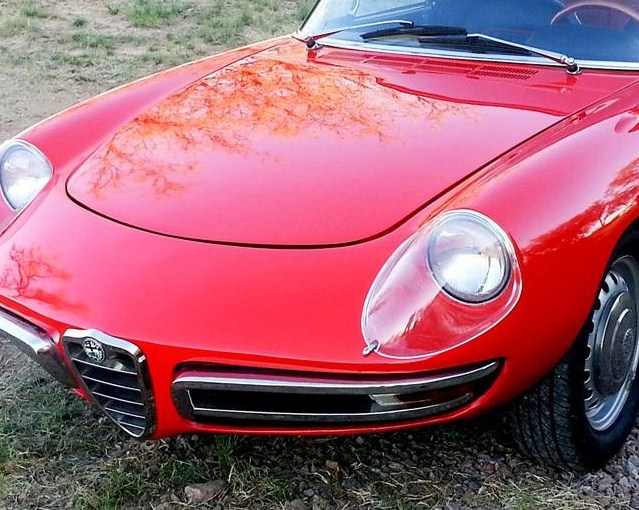 For many Americans, their first recognition of the Alfa Romeo Spider was at the movies when they watched a young Dustin Hoffman driving one, top down, as he sped after his beloved in the 1967 film, The Graduate.

In bright red with its classic roadster proportions and evocatively rounded tail, the newly minted Spider designed by Pininfarina seemed like a joyous entry in the freewheeling world of diminutive sports cars dominated in the U.S. by such British brands as MG, Triumph and Austin Healey.

Alfa Romeo revamped its Spider in 1966 after more than a decade of offering its attractive Guilia and Giulietta sports cars. Compared with the Brits, the new Alfa Spider added a refreshing dose of ’60s Italian style and performance into the mix, and its exposure in the landmark film only boosted the longing for it, and sales for Alfa Romeo.

This year marks the 50th anniversary of the 1966 Alfa Romeo Spider 1600, the Italian automaker’s most emblematic model in this country. The Spider remained in production in various transformations through 1994, and the early models are revered today among collectors.

Powered by a perky and high-revving 1.6-liter twin-cam four, the Spider became known for its lithe performance and agile handling, as well as a means for attracting the opposite sex. The throaty exhaust note turned heads as readily as the sleek styling.

Not everyone was enamored of the new Spider after it was unveiled in March 1966 at the Geneva Auto Show. The earlier Alfa roadsters were known for their curvaceous designs, and this new one seemed to the cognoscenti to be faintly generic and oddly uninspiring.

But the popular view of the aerodynamic Pininfarina-designed roadster won out, and Alfa had a hit on its hands. A contest was held by the automaker for a name for the new car, and Duetto (“duet” in English) won out, although a trademark dispute disallowed the automaker from officially using the name.

The original Alfa Spider was revised in 1970, losing its rounded “boat tail” in favor of the trendy squared-off Kamm tail that followed current aerodynamic theory. It also increased luggage space, which was notably skimpy in the original. But nowadays, it’s those boat-tail Spiders that have gained the interest and values.

Through the years, the Spider grew in proportion and engine size while being progressively altered to accommodate safety and emissions regulations. But it never lost its appeal as a spirited roadster, and a long-lived sports-car survivor long after the others of its era had left the scene.