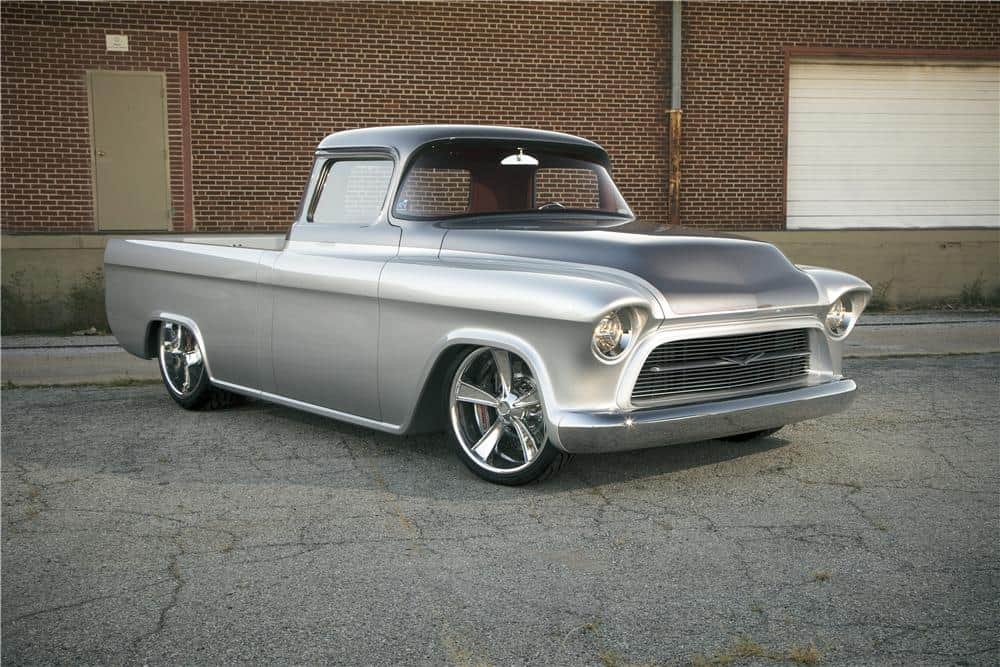 Editor’s note: This is the 25th in a 30-day sponsored series featuring cars to be sold January 23-31 during Barrett-Jackson’s 45th Scottsdale auction.

Owned by Alan Beers, this Chevy has racked up prestigious awards, trouncing car-based creations that typically dominate the hot rod hobby. But instead of asking about the engine or slick paint, the first question that  Beers typically gets is why he chose to build a custom truck when hot rod cars are far more popular.

“That was the point,” Beers explained. “As a lifelong truck fan, I noticed that no one had ever built a truly ‘over-the-top’ pickup. The big shows were filled with really nice cars, but there had never been a truck that was on the same level of the award-winning hot rods. So I decided to build QuikSilver.”

Beers collaborated with Hot Rod Garage of Sand Springs, Oklahoma, to build his vision of the ultimate truck. The basis for the project was actually a truck that never existed.

“We started with a ’57, because that was the last year of the single-headlight cab that I think was the high-water mark for the model,” said Beers. “But I also wanted a fleetside bed, which was not available that year. So we modified a ’59 bed by hand to fit the ’57’s chassis and cab. But that was just the beginning. We literally hand-fabricated from scratch or modified every panel and every inch of this vehicle.”

With an amazing level of sophistication and fabrication that truly makes it a one-off creation, this award-winning truck may be the single most impressive custom pickup truck ever built.

“Pickups are often underdogs in the custom car world because it’s tough to make the entire vehicle work together in concert,” said Craig Jackson, chairman and chief executive of the Barrett-Jackson Auction Company. “These 1950s Chevrolet trucks can look very odd if they are modified with a radical chop or sectioned, which makes the vehicle look out of balance. Builders typically pass over them because it takes so much more thought to modify, especially in a tasteful way. Alan’s team did a spectacular job in turning this pickup into a piece of art. The effort that went into making this truck is simply amazing.”

The firewall was smoothed, the inner fenders hand-fabricated and the hood had to be hand-pancaked and reshaped. Hot Rod Garage chopped the top three inches, and the cowl was filled and moved forward another three inches. The custom front and rear windows were inserted flush, like those on a contemporary car.

“The glass was one of our toughest challenges,” added Beers. “We actually cut down a 1956 Ford car windshield, and the back glass was custom made. We curved it slightly to match the gentle arc of the back of the truck’s cab.”

The list of other visual changes is significant. The front bumper was narrowed, reshaped and tucked. The bed was completely handmade, as were the tailgate and roll pan. Beers then had Jimmy’s Hot Rod Design create a completely new taillight setup. Painted with Planet Color’s vibrant Tungsten hue, the pickup is a combination of American hot rod and European class that is universally appealing.

QuikSilver can really move down the road thanks to a stack-injected 540ci big block Chevy built by Chaz Rose of Tulsa, Oklahoma. Controlled by a Fast XFI computer, the electronic fuel injection sits on an old-school Crower intake manifold with calliope style injector stacks. The headers dump into three-inch exhaust pipes on their way to custom stainless mufflers. The two-tone red and silver paint is an eye-popping combination on what may be the most spotless engine ever created. The result is a very healthy 650 horsepower that is very streetable, yet can cook the tires with ease and wow crowds with the release of the hood.

Power is transmitted to a custom, hand-built, high-performance Gearstar transmission on its way to a narrowed down Ford nine-inch rear end using 3.70:1 gears inside a Strange Engineering limited slip differential. Baer brakes on each corner will rein in all of the truck’s ponies. The chassis consists of a Fatman Fabrications Mustang II-style clip underneath the fully boxed frame, while the rear suspension features a custom-built GAC four-link rear suspension with a panhard bar and Bilstein coil-over shocks. All of the one-of-a-kind suspension components were meticulously machined and detailed by Greening Auto.

The same attention to detail can be found inside the truck, which Chuck Rowland Upholstery designed using a clean, fresh approach. The dash was reshaped and then a custom one-off gauge panel was machined by Greening Auto to hold the custom gauges built by Classic Instruments. The custom one-off steering wheel, gas and brake pedals were also machined by Greening Auto.

Once the hot rod truck hit the show circuit, awards began piling up in the Chevy’s hand-fabricated bed. QuikSilver was in the vaunted Great 8 at the 2013 Detroit Autorama and missed out on the acclaimed Ridler Award by a whisker. It was named Goodguys Truck of the Year. As the year rolled along, momentum kept growing. QuikSilver was a huge star at SEMA 2013 in Las Vegas, driving away with the Mother’s Choice Award, among others.

But even with all of the awards that year, there was one competition that Beers really regrets missing.

“I initially planned to enter it in the inaugural 2013 Barrett-Jackson Cup competition in Reno,” said Beers. “But my schedule didn’t work out. I was pretty disappointed. After watching the 1969 Ford Torino built by Troy and Jack Trepanier of Rad Rides by Troy win, I was very motivated to be part of the show next year.”

In 2014, QuikSilver entered the ring against some heavyweight competition for a prize purse north of $100,000. Judges Bobby Alloway, Pete Chapouris and Bob Millard, some of the most reputable names in the business, chose QuikSilver as one of the “Reno Five” finalists, up against the 2014 winners of the Goodguys Street Machine of the Year, Goodguys Hot Rod of the Year, America’s Most Beautiful Roadster and the Ridler Award winner. It was the pristine pickup that took home the Ultimate Best of Show trophy.

After capturing the Barrett-Jackson Cup, Beers struggled with his next step. He had accomplished his goals of creating the ultimate hot rod, with a bed full of trophies to prove it.

“I decided it was time to let someone else enjoy QuikSilver,” explained Beers. “Building and owning it was an incredible experience. Now, the next ‘caretaker’ can feel the thrill of showing and driving the truck.”

Choosing how to sell the truck was much easier than choosing to actually part with it. Beers has elected to sell it at the 45th Anniversary Barrett-Jackson Auction in Scottsdale in January 2016.

“Barrett-Jackson is the only place I could imagine selling QuikSilver,” said Beers. “The bidders really appreciate all kinds of vehicles, including custom trucks. Award-winning vehicles like mine typically attract maximum attention.”

With its pedigree and drop-dead good looks, the truck is certain to be popular.

“QuikSilver will definitely turn heads at Barrett-Jackson Scottsdale,” noted Jackson. “The experienced builder and hot rodder will recognize that few builds have this level of detail and craftsmanship. From the simple precision of the tailgate latch to the hand-stitched interior, this truck represents some of the finest coach-building ever seen. QuikSilver will make a wonderful centerpiece of a collection anywhere in the world.”