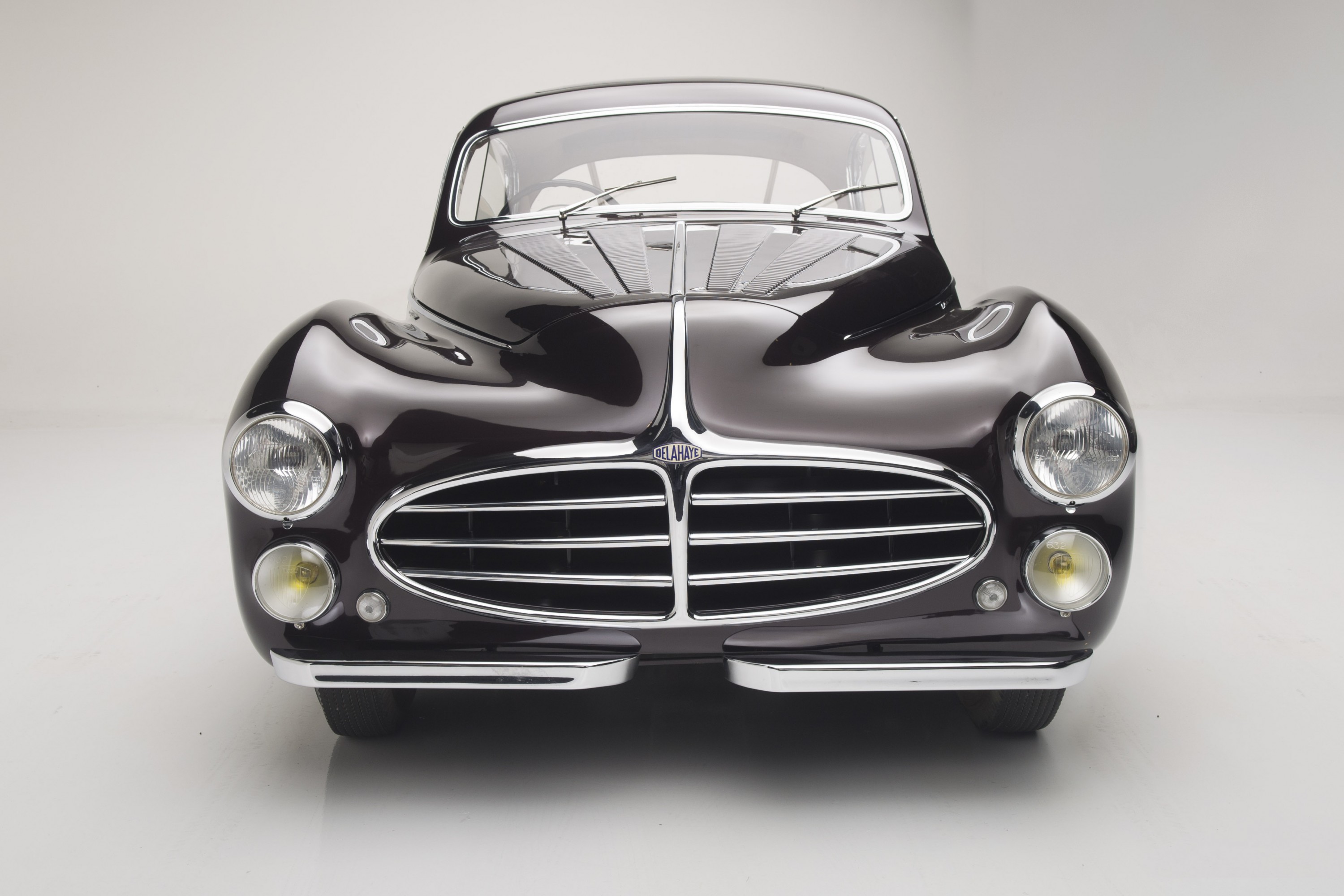 Editor’s note: This is the 23rd in a 30-day sponsored series featuring cars to be sold January 23-31 during Barrett-Jackson’s 45th Scottsdale auction.

The car is a 1953 Delahaye 235 coupe that has unique and stunning bodywork by Saoutchik and has been featured on the 18th fairway at Pebble Beach ‒- and not once, but twice.

“It was the Paris Auto Show car,” notes the consignor, who said he spent 10 years trying to convince its French owner to sell the car. Finally, after 20 years of ownership, the Frenchman was willing and the car was brought to the United States in 1987, where it not only has been to Pebble Beach, but has been displayed in a major car museum.

It was completely original, the owner said, adding that, at the time, “We all restored everything.” The Delahaye was no exception, undergoing a complete restoration.

The car is painted plum on the outside and has a cream-colored interior. It is driven from the right-hand position. Its engine is a straight 6-cylinder topped by three carburetors, providing more than 150 horsepower and a top speed of more than 100 miles per hour. The engine’s power goes to the rear wheels through a 4-speed manual transmission.

But it was the car’s beauty, not its mechanical components or performance potential, that drew the owner’s interest. He was attracted to the car because of the striking Saoutchik bodywork.

“You walk around it slowly,” he said. “You see the balance between the top and the bottom. The beauty of all the lines. The front and the back. There are many Delahayes that are not beautiful. Not every car designed hits it, but some are just stunning.

Emile Delahaye was the son of a tapestry worker in France but studied mechanical engineering and went to work in the drawing office of a company that made steam engines, locomotives and other railroad equipment. He served as an engineer with the French army in the 1870 war against Prussia; then lived in Belgium before returning home and worked at a foundry. Delahaye eventually became a partner and then purchased the foundry, turning it into a producer of engines he designed himself.

In 1895 Delahaye secured a patent for his first motorcar and put his first automobile ‒- a chain-driven car perhaps most noteworthy for its Michelin pneumatic tires -‒ into the Salon du Cycle in Paris. Delahaye built more than 600 cars before selling his firm when he was in his mid-50s. However, before selling, Delahaye not only chose the new owners but also key personnel, who would produce outstanding cars bearing his name.

In the mid-1930s, Delahaye introduced its 135 model, which would be adorned with amazing coachwork from the likes of Chapron, Franay, de Villars and Figoni et Falaschi.

After World War II, Delahaye was among the first French automakers to return to their primary business, initially with the 135M model and then the 235, which again would be dressed by such coachbuilders as Letourneur & Marchand, Figoni, Faget & Varnet and Saoutchik.

Only 85 cars were built to the 235 specification before Delahaye realized it could not sustain its business alone. So it merged with Hotchkiss, another French automaker that had been in business since 1903. Hotchkiss, intent on producing Jeeps under license, stopped all car production after the merger and secured its deal with Willys-Overland. Two years later, Hotchkiss-Delahaye became enfolded into a company that primarily produced home appliances.

Like Delahaye, Saoutchik officially ended business in 1955, making this one of the last great coach-built Delahayes.

Jacques Saoutchik’s real first name was Iakov, who was a teenager when his mother and siblings left their native Russia to resettle in Paris. In France, “Jacques” Saoutchik resumed his work as a cabinet maker. It wasn’t long before he ‒- and later with his son, Pierre ‒- was doing custom woodwork for cars. He then began designing and creating complete and artistically crafted coachwork on Duesenberg, Rolls-Royce, Voisin, Mercedes-Benz, Daimler, Talbot, Cadillac and other chassis for wealthy clients, including Hollywood stars and several heads of state.