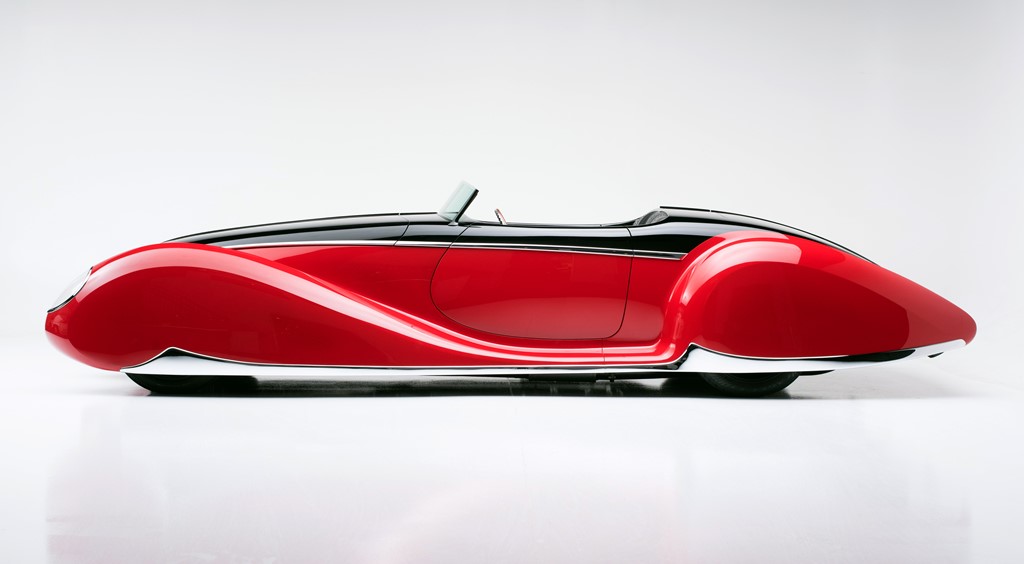 Editor’s note: This is the 22nd in a 30-day sponsored series featuring cars to be sold January 23-31 during Barrett-Jackson’s 45th Scottsdale auction.

You might just say “The French Connection” is a feast for all the senses. You’ll hear it when the throaty rumble of the extraordinary, Italian-made V12 Hemi engine fires up, sounding somewhat like a World War II fighter jet. If you dared to touch the sleek body, you’d feel the flawless, smooth metalwork and the bumps of the exquisite leather upholstery, made from 15 ostrich skins and two cow hides. The real feast, however, is for your eyes, as you gaze upon its voluptuous bodywork, painstakingly hammered into perfection over thousands of hours by the talented Marcel Delay and his sons.

This remarkable custom car was the last build of the legendary Boyd Coddington, and it is evident he and his talented team pulled out all the stops. Undoubtedly Figoni et Falaschi-inspired, the Marcel & Sons custom hand-formed aluminum and steel body rides on a custom one-off Art Morrison chassis. Coddington was not a fan of handles; it is said he once even shaved off the handles of a Mercedes-Benz he leased and repainted the car. Thus you’ll see no handles on The French Connection’s doors –- and interestingly there are also no handles on the matching ostrich-leather luggage tucked into the trunk.

The car was literally built around that extraordinary V12 HEMI, and the mechanics of the car are as remarkable as the rest. Case in point: a custom-built Turbo 400 transmission and a hand-fabricated fuel-injection system with 12 Weber carbs turned into throttle bodies for easy starting and idling.

Boyd’s son, Boyd Coddington Jr., recently wrote about The French Connection: ” ‘The French Connection’ was the last fully formed metal body hot rod to roll out of Boyd Coddington’s Garage. This project was built for longtime customer and family friend Rocky Walker. The inspiration behind this creation started several years before, when we constructed the 1939 Lincoln Zephyr, known as both the “Led Zephyr” and “Lead Zephyr.” The Led Zephyr was the start of the next chapter of hot rods my dad wanted to build. I remember a conversation we had where he said, ‘Junior, I’m tired of looking at the same old thing –- it’s time to take this to the next level.’ What he meant by the ‘next level’ was the larger or full-fender cars. With that, the renderings started to fly. Between Todd Emmons, Eric Brockmeyer and Chris Ito, we had them drawing everything from Packards to Auburns.

“Through those renderings came the all-steel and hand-fabricated 1936 Delahaye or what came to be known as the ‘WhattheHaye.‘ It was based on the French-designed Delahaye of the 1930s. ‘The French Connection’ was patterned after a few of the pre- and post-war Delahayes, principally the 1939 Type 165 and the 1949 Type 175S. For their time, these cars were dramatic extrapolations of the full-fender look. In the car we constructed, we felt that we captured the essence of what Mr. Delahaye’s designers were trying to accomplish – and we added touches from the 21st century.

“My dad set a standard for his workmanship, creativity and thinking from which he never deviated. He strived to personalize each hot rod to be different without being odd. The flawless metalwork, paint and wheels were always a given. When he saw a line in the body that didn’t suit his overall vision, there was no hesitation, and that line was changed. ‘The French Connection’ reflects the awesome standards and the creative thinking of my dad.”

When you hear the unmistakable sound of that Italian-made V12 Hemi roar into the arena at the 45th Anniversary Scottsdale Auction in January, take heed. Virtually impossible to duplicate, this car isn’t something you’re going to see every day.