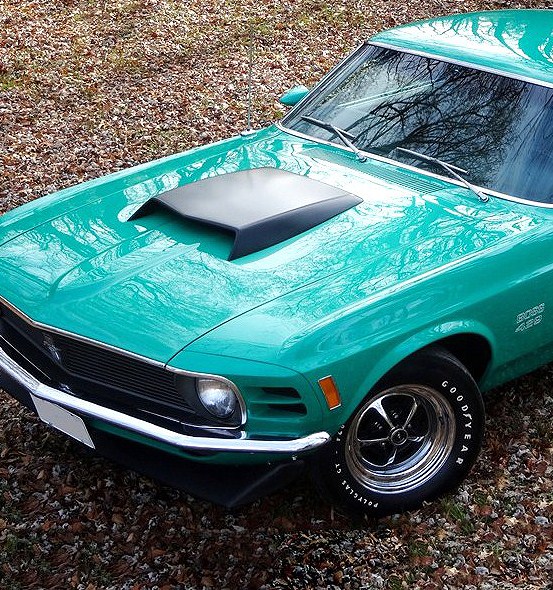 Ford’s quest to homologate its 429 cid “semi-hemi” engine for NASCAR racing resulted in one of the mightiest performance machines of the muscle-car era, the 1969-70 Mustang Boss 429, a limited-production pony car that is on every Ford collector’s A list.

Three of these brawny Bosses will be offered during Barrett-Jackson’s 45th annual Scottsdale collector car auction, which takes place January 23 through January 31 at the WestWorld event center in Scottsdale, Arizona.

There were just over 1,350 Boss 29 Mustangs built during their two-year run, powered by Ford racing’s big-block engine designed to compete in NASCAR against Chrysler’s dominating 426 Hemi V8.

For the Boss 429, Ford contracted with Kar Kraft to wedge the huge engine into the Mustang, which necessitated a number of alterations, including the widening of the inner front fenders and relocation of the shock towers, revising the front suspension and moving the 85-amp battery to the trunk.

Engine performance was conservatively stated by Ford at 375 horsepower and 450 pound-feet of torque, but actual output was much more, according to contemporary reports that pegged the horsepower at more than 500. The Boss 429’s stunning performance on the track and street spoke for itself.

The Calypso Red Boss 429 was restored by a noted expert

The 1969 Boss 429 Lot #1360) on Barrett-Jackson’s docket was a one-owner car until 2014, when it was pulled from 33 years of storage and completely restored with numbers-matching parts, according to Barrett-Jackson’s catalog description. The original engine is said to have just 19,500 miles on it. The Mustang is painted Royal Maroon and documentation includes a copy of the original title and Deluxe Marti Report of authenticity.

The 1970 Boss 429 (Lot #1400.2) in Grabber Green, one of just 43 examples in this rare color, is an original, numbers-matching Mustang with just 40,900 miles on its odometer, the catalog says. The car is documented with Ford factory paperwork, prior ownership history, restoration details, Marti Report and Ford Motor Company window sticker.

The Calypso Coral 1970 Boss 429 (Lot #1339.1) was restored in 2013 by well-known marque specialist Arild Thu, and it retains its original Kar Kraft and Ford invoices, original sales invoice and Marti Report.

“Each of these Fords represents a great example of American craftsmanship and engineering,” Steve Davis, president of Barrett-Jackson, said in a news release. “It’s clear their owners really had an eye for detail and were willing to put the time and effort into making them truly remarkable.”