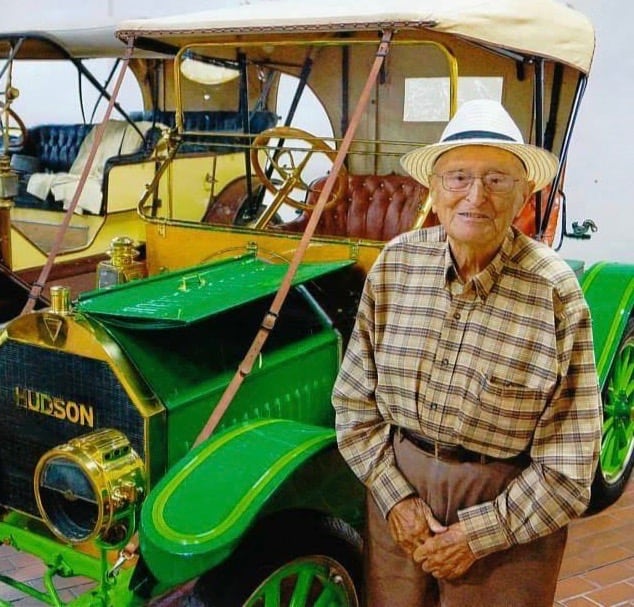 Eldon Hostetler, who assembled the world’s largest collection of Hudson vehicles, died January 8 at the age of 93, the Gilmore Car Museum confirmed. Hostetler had so many Hudsons that they overflowed his own museum in Shipshewana, Indiana, and were displayed at the Gilmore in neighboring Michigan.

“Eldon became an icon in American automobile history, a giant to the collector car hobby and a hero to his local community,” Michael Spezia, executive director of the Gilmore, said in a news release. “By passionately preserving some of the finest and rarest Hudson automobiles produced, coupled with his fondness and enthusiasm for sharing his hobby, and his genuine desire to give back to the community, Eldon leaves a lasting legacy with great impact.”

Hostetler grew up on a large Amish farm and was fascinated by the cars they drove. One day, a neighbor arrived in a 1936 Hudson Terraplane sedan to help Hostetler’s father with the wheat harvest. The car was “tan in color with semi-automatic shifting next to the steering wheel,” Hostetler recalled on his museum’s website. “I was allowed to drive this car several times to go from farm to farm.”

As soon as Hostetler was old enough to get his driver’s license, he bought a second-hand ’38 Hudson.

“My Amish grandfather loaned me $350 to buy the car if I promised not to tell Mother he did this,” Hostetler reported.

Hostetler’s wife, Esta, also learned to drive on a Hudson and they drove Hudson products until 1954, when the company merged with Nash and became American Motors.

“I have had good fortune in my life, which made it possible to collect old Hudson cars,” wrote Hostetler, who invented a poultry feeding and watering system, and established Ziggity Systems Inc. to manufacture them. In his lifetime, Hostetler held 65 patents.

Some of Hosteler’s Hudsons in his museum

That collection grew to 48 cars, production and special models, including Hudson racing cars, more than enough to fill a 60,000-square-foot museum at the Shipshewana Town Center.