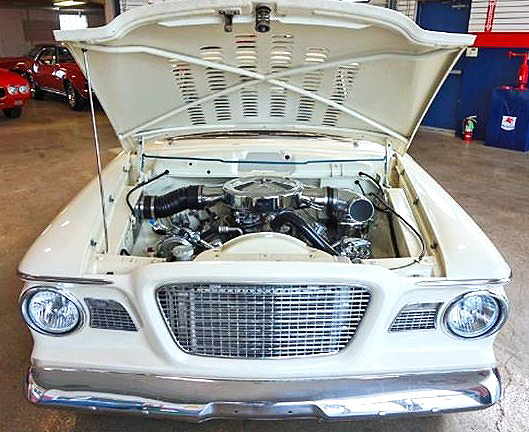 I’ve always liked the idea of a sleeper, a plain-Jane car with hidden hot rod performance designed to surprise the muscle-car guys when the light turns green. A street-rod-building buddy of mine once took a ’65 Rambler American and tuned it with a 500-horsepower V8, race-spec drivetrain, disc brakes and suspension mods, while keeping it essentially bone stock on the outside.

The Pick of the Day is something along the same lines, a 1963 Studebaker Lark VI two-door sedan that packs a 350 cid Chevrolet V8 under its hood. Although the Lark has been slightly lowered, has a louvered hood and wears a set of American Racing wheels — plus those little Moon eyes behind the front wheels – it stills look stock enough to fool the locals.

Some Larks did come with Studebaker’s own 289 cid V8s, which provided some spunk for the lightweight compact car. But this car’s Chevy 350, which has been treated to such performance touches as an Edelbrock carburetor, should make this Lark really fly.

Contrary to prevailing taste, I always thought the Lark’s unique styling was cool. They were kind of stubby, but with a bold grille up front and subtle chrome touches that highlighted its curvaceous shape. They were also nice to drive, as were Studebaker’s entire lineup of cars and trucks in the final years before the company’s demise in 1966.

According to the listing on ClassicCars.com from a Homer City, Pennsylvania, muscle car dealer (and Homer would be the perfect name for this car), the Lark’s custom build sheet includes an 8-inch Ford rear end, B&M Converter lock up switch for the automatic transmission, aluminum valve covers, aluminum radiator, air conditioning with a polished compressor, chrome details in the engine compartment, power brakes and Uro headlights.

While the blue velour and the boxy console might not be to everybody’s tastes, the Lark looks good in the photos, with an aggressive stance over the custom wheels and performance tires. The photos of the engine compartment and undercarriage show a car that looks very clean and well-built.

The asking price is $19,900, which seems fair enough for this hot little rod, a unique ride that would be just the thing for a Saturday night cruise or an out-of-town road trip.