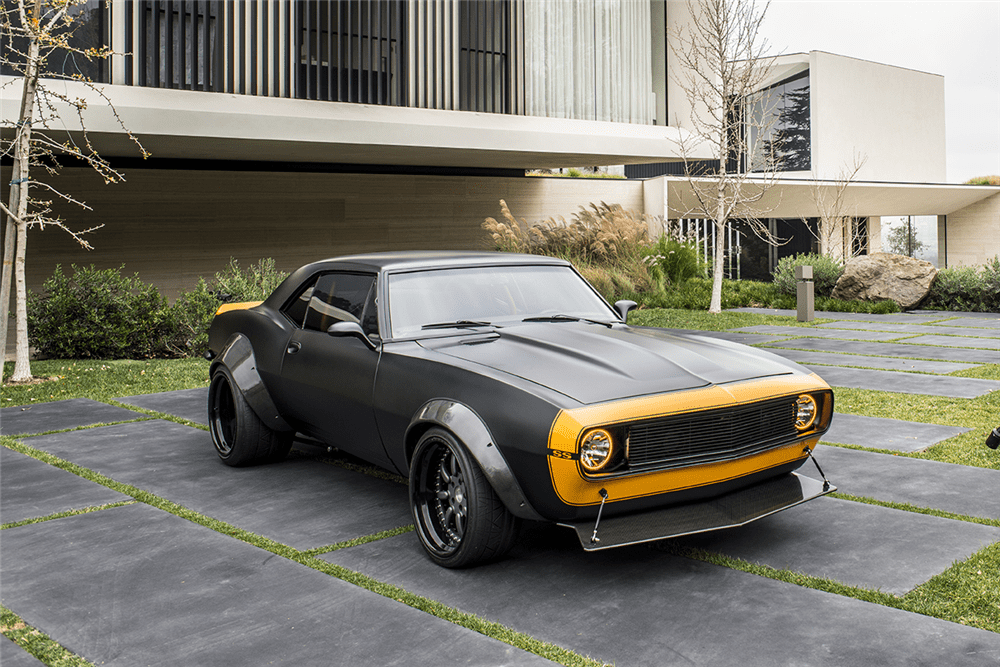 Editor’s note: This is the 16th in a 30-day sponsored series featuring cars to be sold January 23-31 during Barrett-Jackson’s 45th Scottsdale auction.

If you have seen the latest installment in the Transformers movie franchise, Transformers 4: Age of Extinction, you will recognize this 1967 Chevrolet Camaro resto-mod as Bumblebee.

Transformers director Michael Bay is particularly fond of Bumblebee and owns not one, but two such Camaros in his personal collection, including a yellow 2010 Camaro and this 1967 Camaro being offered for sale at Barrett-Jackson Scottsdale.

The car, heavily customized and featuring so many unique parts, is recognized for its scenes from Age of Extinction in which Mark Wahlberg’s character, Cade Yaeger, talks to Bumblebee and the car responds by performing indoor burnouts (the scene was filmed at the GM Tech Center “Design Dome” in Warren, Michigan). Later in the movie, the 1967 Bumblebee Camaro transforms into a more familiar 2014 Camaro during a “drive-by” scene.

Unlike some movie cars, this one runs, drives and can be enjoyed to the fullest. It’s also a full-fledged Resto-Mod Camaro with modern equipment and amenities wrapped in classic ’60s sheet metal.

Like a brand-new Camaro, Bumblebee has been retrofitted with a modern, fuel-injected V8 engine with an overdrive manual transmission. The suspension has been upgraded and is heavy-duty, and four-wheel disc brakes have been added. Drivers and passengers will be comfortable with modern air conditioning, a modern stereo and late-model leather seating.

This 1967 Camaro has some special features that are instantly recognizable from its movie. The features are by no means accidental, as Bay set out to make Bumblebee more bold and muscular in the fourth film. The most obvious are the massive, one-off carbon-fiber flares that cover extra-wide Nitto tires wrapped around custom three-piece wheels. The flares are complemented by a carbon-fiber front “splitter” that juts out from below the front of the car. Lurking behind original-style “hideaway” headlight doors are custom LED Halo headlights that emit an ominous yellow glow when activated.

The car has various yellow accents, including a painted RideTech “TigerCage” roll bar peeking out of the cockpit, as well as a yellow rear spoiler and striping. The yellow theme is carried under the hood with custom carbon-fiber and yellow engine covers and billet aluminum core support bars. The smooth firewall supports a hydraulic assist braking system and modern Detroit Speed “Select-A-Speed” windshield wiper system.