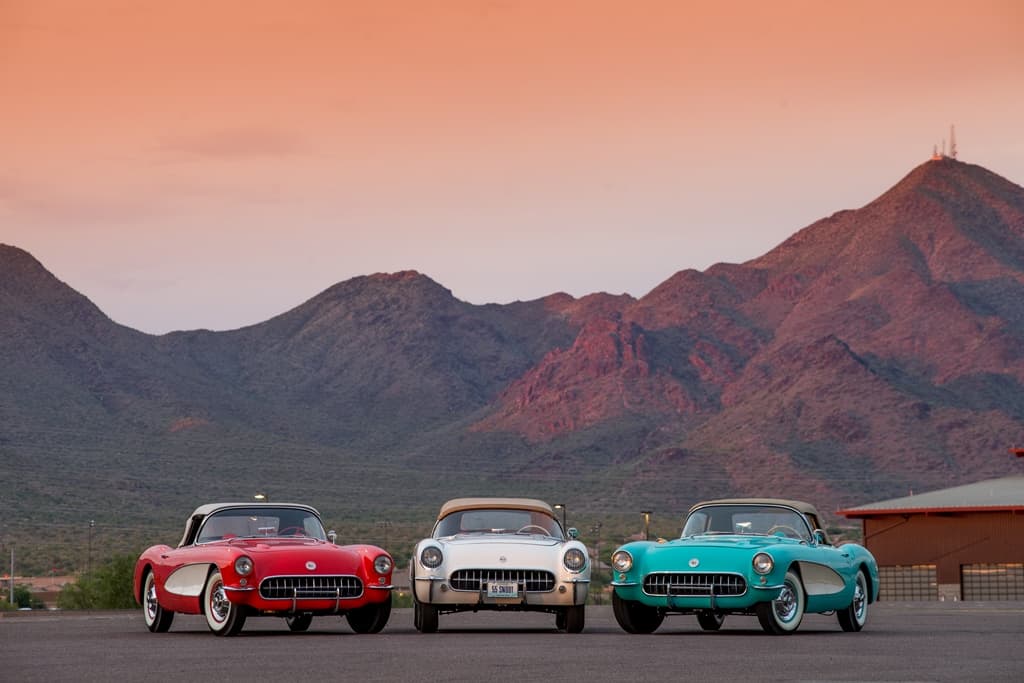 Editor’s note: This is the twelfth in a 30-day sponsored series featuring cars to be sold January 23-31 during Barrett-Jackson’s 45th Scottsdale auction.

Chevrolet’s Corvette was originally developed to be a part of the General Motor’s Motorama exhibit at the 1953 New York Auto Show, where it was so well received that GM decided to make a production version. Over 60 years later, America is still engrossed in a love affair with its sports car.

There was time to build only 300 cars for the initial 1953 model yar. More than 3,600 were sold the following year, but only 700 were produced for 1955, when Chevrolet launched its now-heralded small-block V8 engine.

Crossing the block at Barrett-Jackson’s Scottsdale auction is a Polo White ’55 Corvette that was the first production Corvette for the model year and the first to be equipped with a V8. This serial number 1 Corvette was rescued by a young enthusiast for $500 after being discovered after sitting behind a North Carolina residence more than 30 years ago. Aside from being the first car produced for 1955, what makes this car special is that it was built on a 1954 frame with modifications for V8 engine mount and fuel pump clearance. The body is basically that of a 1954 Corvette with firewall modifications for the heater hose relocation and the plunger-style windshield washer.

However, the car features distinctive features for 1955: a special grease lubricator on the distributor, an external Mallory capacitor, special ignition shielding with a very rare housing and the extremely rare original Hallett ignition shielding.

This car received a professional frame-off restoration with all date-code and number-correct components, resulting in an NCRS Top Flight at a chapter meet with a net score of 99.3 in 2008.

This fully optioned assembly-line prototype was featured at the GM Motorama. It came with a color combination of Venetian Red with Polo White coves and solid red interior. It boasts a 265cid, 225-horsepower V8 with a special solid-lifter “Duntov 098” camshaft, and 3-speed manual transmission.

It has a pre-production prototype body sculptured in the Chevrolet Design Studio; several of the panels were hand-laid because the press-molded production panels were not ready in time for the Motorama show.

It is the only 1956 production body known to be built without the fender scoops. The car received a professional frame-off restoration using all date-code and number-correct components, resulting in an NCRS Top Flight at a Chapter meet with a net score of 99.5 in 2008.

The nearly identical 1957 Corvette was noted for its performance and was the last to sport single headlights. This VIN #001 car was not only the first production 283cid Corvette, but the first for the entire Chevrolet line up. The Cascade Green vehicle with its beige coves and beige and green interior was identified by mere coincidence in 1968, when its young owner, a college student, asked NCRS technical chairman Sam Folz to help solve a water leak problem.

This ’Vette was born the second week of August 1956, with the majority of components dated July 1956, including the engine, transmission and differential. The common thought is that only 20 of the July 1956 engines were built. The car features a 283cid dual four-barrel engine with 225 hp, Powerglide transmission, power convertible top, hardtop, Wonder Bar radio, courtesy lights and windshield washers. The car achieved NCRS Top Flight at a Chapter meet with a net score of 97.4 in 2008.

Corvette-lovers will soon have a chance to own these significant pieces of automotive history when The Serial One Corvettes cross the block in Arizona at the 45th Annual Barrett-Jackson Scottsdale Auction, January 23-31, 2016.