A Vincent motorcycle rekindles memories of a past life 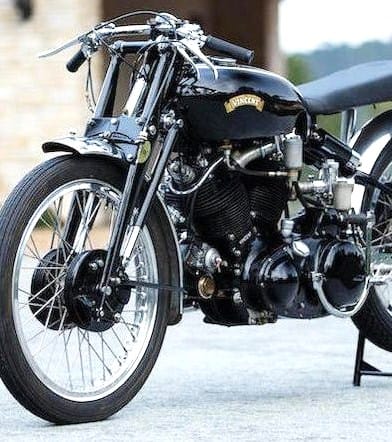 I caught motorcycle fever in a big way during the early 1970s, riding a motley succession of used bikes that now are classics. Back then, they were cheap enough on my part-time salary as I worked my way through college.

The favorites were a funky 1965 BMW R50 that just chugged along through whatever ordeal I subjected it to: rain, mud, even snow. After that came another 1965, a BSA 650 Lightning that was my dream bike and ran like an angry bull. Unlike the slow but sturdy German BMW, the more high-strung Britain needed lots of hands-on care.

That was all long ago, but I got a shock of nostalgia just the other day when I read about the top motorcycles being offered January 7 by Bonhams at its Las Vegas auction. Lo and behold, a racing motorcycle featured at the sale is one that I once knew well, though somewhat obliquely, as well as its famous rider.

Back then, I fell in with a group of fellow bikers who favored the same oddball rides that I did, mainly British. One guy had a Norton ES2 single, another one had a Royal Enfield 650, and there were any number of Triumphs and such for us to rumble around on.

We used to hang out at a Norton motorcycle shop in suburban Philadelphia owned by the coolest guy we knew, the veteran motorcycle racer Ed LaBelle, who would help us keep our bikes running despite our being essentially broke. He was around 20 years older than we were, and his vast knowledge and experience were impressive.

Some of my best memories from those days were when I worked for LaBelle as a gopher, driving his shop’s van up to the New York port of entry to pick up brand-new Norton Commandos in crates shipped from England. They’d load a pair of them into the nondescript Ford Econoline, and I’d head back to Philly. There, I’d help uncrate them and get them going.

I knew back then that besides being cool, LaBelle had been all over the map as a highly competitive motorcycle racing champion, most notably on those great Norton Manx 500cc singles that had ruled the Isle of Man and many other grueling road races. He was a motorcycle drag racer as well as a road racer, which is where the bike at Bonhams auction comes in.

At LaBelle’s dealership, standing off to the side in the showroom among the new and used Nortons was his special racing machine: a 1952 Vincent Black Shadow, which was a totally glorious, stripped-down V-twin that filled me with awe. I had never seen such a thing. Without even knowing much of the details of its illustrious racing history, it was stunning just to be in its presence. And what a great name.

That very Black Shadow will be auctioned by Bonhams in Vegas. Back when I knew it, the Vincent was fairly ratty after its years of competition, though beautiful just the same. Now, it is thoroughly restored and apparently a showpiece.

The Bonhams catalog filled me in on its racing days. It seems that LaBelle, as well as being a Canadian champion on Norton Manx motorcycles and once riding a factory BMW RS54 in the Isle of Man competition, would race Vincents for the original U.S. distributor for the brand, Gene Aucott. It was during that time that Aucott took delivery of a performance-tuned competition Black Shadow special ordered by a customer.

But the customer flaked on the sale, and after some dealing, LaBelle became the owner of the new Black Shadow. He drove it briefly on the street to break it in, then took it to drag strips and road courses across the U.S. and Canada, where unlimited-class road racing was popular.

The Vincent was nicknamed ‘Smoker’

“In 1964, the ‘Smoker’ as the bike came to be known, was on the high banks at the just-opened Daytona International Speedway, running for speed records sanctioned by the United States Motorcycle Club,” the catalog says. “Before tire wear and carburetor troubles sidelined the effort, the Vincent reportedly attained 128 mph.”

So how cool is that?

In the mid-80s, LaBelle sold off his stock of Vincents and parts, after which the current owner bought the Smoker and had it extensively restored by marque experts, Bonhams says.

“Freshly restored, in 1997 the Vincent was ridden for parade laps at Daytona Speedway, where it was reunited with LaBelle,” the catalog says. “Since then it has won awards at numerous concours events.”

If only. If only I could go back to those days with a new appreciation for that magnificent Vincent. If only I could stroll into the Las Vegas sale and pony up for the Black Shadow. But it’s pretty certain to go way out of my price range at auction.

Ed LaBelle died in 2010, and I’ve lost touch with the survivors of those crazy café-racer days. But how great is it to encounter something long lost in my memory, so unexpectedly, and have it come rushing back again?

But this is what the hobby is all about, with the great old cars and bikes that live on, preserving in their mechanical souls the glories of our past.