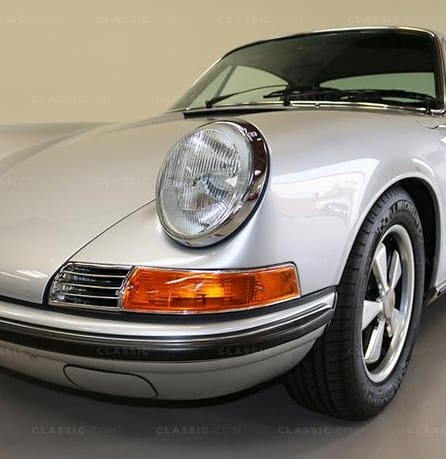 The 1970 Porsche 911S coupe is an example of the most desirable of first-generation 911s.

New Year’s Day is the time to dream big, so I offer on this day of lofty aspirations a Pick of the Day that is the classic car of my personal dreams, although it’s one that seems more and more to be sailing out of sight.

That would be the 1970 Porsche 911S coupe advertised on ClassicCars.com by a dealer in Miami, Florida, who says it is in perfect condition after a full restoration. For me, this car totally hits the spot, the best Porsche of the first-generation 911s and done in the color combination that I would choose.

The business end of the Porsche 911S

“This rare, perfectly restored beauty can be yours today, without the wait,” the seller tantalizes. “This stunning 1970 Porsche 911S in silver with black German vinyl interior was restored some five years ago by one of California’s most renown(ed) shops.

“When we bought it, we received a 1970 Porsche that looked and drove like it had just rolled off the production line. Indeed, it’s only driven some 2,400 miles since its meticulously documented, full nut-and-bolt restoration.”

As most car people know, classic Porsches have been the hot ticket of the collector car market for the past few years, doubling and even tripling in value. And then there are the Steve McQueen outliers, the Porsche 911s that have sold at auction for more-than seven figures solely because the late actor once owned them.

While this car has no apparent celebrity status, it’s sure to be a pricey number. The dealer’s listing has one of those “Contact seller for price” notations, never a good sign, and it should go well into significant six-figure pricing. According to Hagerty’s recent valuations, the average price these days for a decent 1970 911S is $137,000, peaking at $214,000 for one in perfect concours condition.

Sigh. That’s more than twice the value as recently as January 2013, according to Hagerty’s valuation chart, and more than three times the value since January 2012. Surely not the lofty price hikes of rare Ferraris or famous Porsche race cars, but impressive nonetheless. Who knew?

My ClassicCars.com colleague, Larry Edsall, calls me a “Porsche whore,” which I don’t really dispute. Unfortunately, just as I got turned on to vintage Porsches, the rest of the collector car world apparently did as well.

But enough about my personal finances, or lack thereof. I should rest easy because I already own a desirable Porsche, a 1962 356 Super coupe, which I totally enjoy and don’t plan on ever selling whatever value it eventually reaches. At least, that’s my current stance. However, the 356 would make a good down payment on the 911S.

The Porsche is said to be in perfect restored condition

If this 911S is as pristine as the seller describes, it could be well on its way to the top Hagerty valuation. You’ll have to call the seller to find out. The upcoming Arizona collector car auctions, which are loaded with Porsches of all types, most likely will set a new standard of values.

Of course, if you were to buy this most-excellent Porsche 911S, you would be faced with the dilemma of so many collectors with perfect-condition cars that are appreciating in value: drive it or preserve it? The dealer notes that you could have your cake and drive it, too, but only if you are very careful.

“This car only has one drawback: you might be torn to preserve it as it is certain to accrue in value, but once you grab its black leather wheel, you’ll never want to let go,” the seller notes. “Our advice would be to conserve it with care, both in the garage and on the road.”