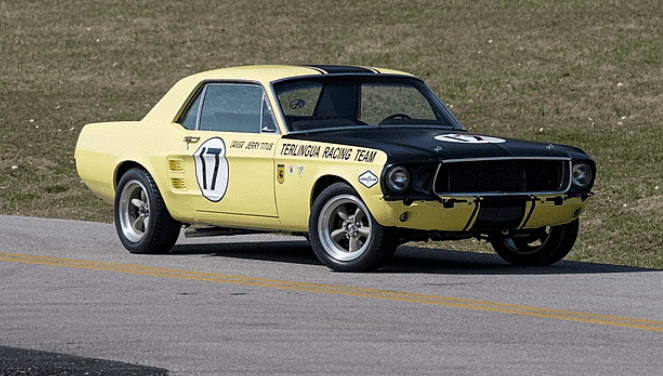 “I’ve always been a fan of historic race cars but never had the budget for a genuine race car driven by one of the greats like Jerry Titus,” said the owner of our Pick of the Day, a 1967 Ford Mustang made to look like the 1967 Terlingua Mustang.

The seller, in Jefferson City, Missouri, states in his website dedicated to the car’s build, as referenced in the advertisement on ClassicCars.com, that it started with a “very nice yet humble ’67 C-code coupe” which then underwent a full rotisserie restoration.

According to the seller, no expense was spared to make this the nicest looking and most drivable Mustang possible, “I wanted all the looks without the fussiness of a full-tilt race car. This car was built with tours, car shows and road trips in mind.

“I tried to make this car as accurate as possible, because of the driving style of Mr. Titus, there are many minor variations of paint scheme and decal placement. I picked up the individual car I liked best and duplicated that.”

Shelby fans have long been familiar with the “Angry Rabbit” that appeared on a crest representing the Terlingua Racing Team, known as a group of pranksters and a team that had plenty of fun but could also be serious, especially when racing. The Angry Rabbit appeared on a number of Cobras and other Shelby racers, but reached its peak of prominence riding shotgun on the front fenders of Jerry Titus’ 1967 Trans Am Mustang notchback coupe.

The technical editor and then editor of Sports Car Graphic magazine, Titus won both the 1966 and 1967 Trans Am Championships for Shelby American in his famous Yellow Mustang.

According to the seller, the restoration included finishing the car in famed “Shelby Gawd Awful Yella” paint with matte black hood and Titus’ No. 17.

The heart of any race car is the engine, and this lookalike is no exception, powered by a 351 Windsor balanced with fully ported heads and with Comp Cams Roller rockers, a Holley 670 Street Avenger carburetor and Holley high-volume fuel pump with an oversize aluminum clutch fan and fan shroud radiator to keep everything running coolly.

According to the seller, all of the metal surfaces of the interior have been painted and the car has all new gauge bezels, lenses and dash trim while the steering wheel has a polished wood rim. Front seat belts are 3-inch-wide competition belts.

The listing states that every square inch of the car has been restored and rebuilt, including items like the heater unit, and the car has received a complete foam and seal kit.

The front suspension has been rebuilt with all new components except for the factory GT coil springs and sway bar, with the seller stating “with numerous previous builds I have found this to be the perfect touring suspension with heavier KYB shocks, 8 inch wide wheels and 50 series tires.”